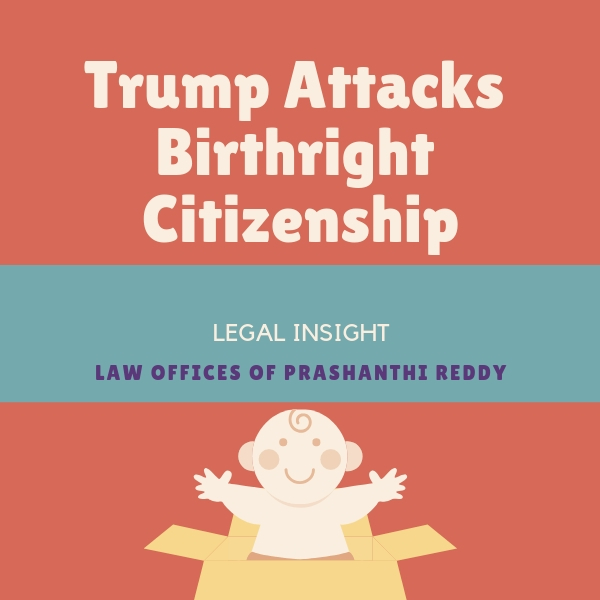 President Donald Trump says he is working on an executive order that will end birthright citizenship – a principle that states that anybody born in the U.S. is automatically a U.S. citizen. He revealed this during an interview with Axios. Unsurprisingly, this assertion has been met with much debate and dissent. Is it even possible that a president should and can have the autonomous power to solely decide the fate of birthright citizenship? Besides, is the underlying premise that undocumented immigrants exploit birthright citizenship sound?

What Is Birthright Citizenship?

The Fourteenth Amendment to the US Constitution establishes the principle of birthright citizenship known legally as jus soli. The amendment states – “All persons born or naturalized in the United States, and subject to the jurisdiction thereof, are citizens of the United States and the state wherein they reside.” While those in opposition of this law such as Trump claims that this law is abused by undocumented immigrants who enter the U.S. for the sole reason of giving birth, the language used in this law is unambiguous.

What Is The History Behind Birthright Citizenship?

Adopted in 1868, the 14th amendment was affirmed by the Supreme Court in deciding the case of Wong Kim Ark v United States on March 28, 1898, in a 6–2 decision.  Born in San Francisco to Chinese parents, Wong was detained upon returning to the U.S. from a temporary visit to China. In the ensuing case, the U.S. supreme court decided that Wong gained his citizenship at birth stating, “the American citizenship which Wong Kim Ark acquired by birth within the United States has not been lost or taken away by anything happening since his birth.”

Can Trump Rescind Birthright Citizen With An Executive Order?

Even if the President wishes to rescind the birthright citizenship law, an executive order is not the right path. Only another constitutional amendment can scrap the Fourteen Amendment. This will require two-thirds of votes in the Senate and the House of Representatives as well as approval from three-quarters of U.S. states. As such repealing a law with an executive decree would undermine U.S. democracy.

Also, the implementation of an executive order receding the birthright citizenship will prove problematic. Would the executive order apply to current U.S. citizens born to undocumented immigrant parents? How would it affect split families? Would the law make some children stateless? What about children born in the U.S. to visa holders?

Lastly, the United States is not the only country that has birthright citizenship as claimed by Trump. Over 30 countries, such as Mexico, Canada, and Malaysia practice the jus soli principle with no restrictions.

The timing of this announcement by president Trump to end birthright citizenship with an executive order is suspect and is seen by many as an attempt to appeal to his home base during the midterm elections. President Trump’s immigration stance was one of his central themes during his presidential campaign, and there is no doubt that this stance was crucial to his 2016 election win. As the midterm elections will go a long way in deciding how successful the second half of his first term will be, many feel Trump is merely falling on familiar sentiments that won him the presidency. Similar to the White House announcement of dispatching over 5,000 troops to the U.S. border, Trump’s proclamation to end birthright citizenship may just be an attempt to turn America’s focus to immigration issues in light of the midterm elections.