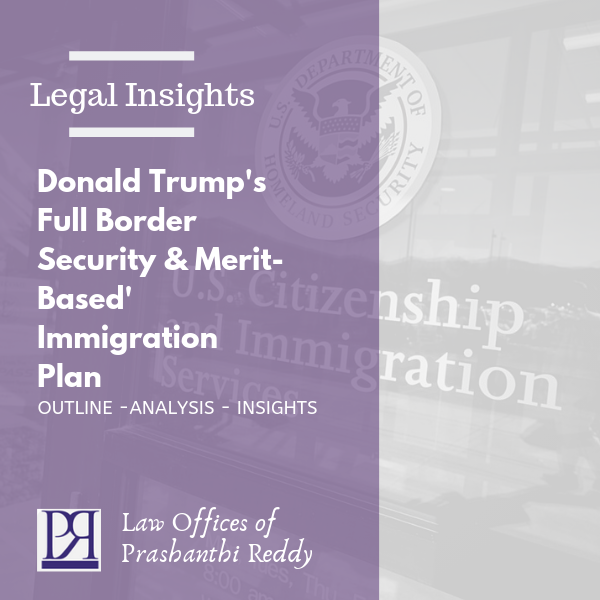 On May 16, 2019, President Trump unveiled a new immigration plan during a White House Rose Garden event. The plan, which was drafted in large by Jared Kushner, Trump’s senior adviser, and son-in-law, is in two parts. The first part of the plan deals with full border security, while the second part seeks to create a merit-based immigration system. According to President Trump, this immigration plan would ‘allow citizens to prosper for generations to come’. And while this plan has attracted a lot of media attention, it is unlikely to result in new laws/regulations any time soon. In addition, this immigration plan is lean and fails to tackle several problems and issues that plague the U.S. immigration system.

Outline of the Immigration Plan

Fully secure the border. The first part is outlined in a single key proposal – fully secure the border. The President wishes to create an autonomous border security fund fueled by revenues and fees generated at ports of entry. The fund is to be used to provide law enforcement with the resources they need to operate, thus ensuring they do not need to wait for Congress to allocate the resources needed. In addition, the plan seeks to put in place measures that would ensure structural changes to the major immigration agencies. This would help curb problems such as visa overstays. The plan also targets the border wall. Trump wishes to expedite the completion of barrier construction in important locations – this includes adding 400-plus miles of wall to the southern border. This plan seeks to (1) ensure all persons and goods are inspected at ports of entry, (2) stop the movement of counterfeit goods, contraband, and drugs over the border, and (3) expedite trade.

Restore integrity to America’s exploited asylum process. The plan wishes to accelerate relief to legitimate asylum seekers. At the same time, the plan also wishes to curtail gaps in the immigration system that facilitate human smuggling and illegal activities along the US’ southern border.

Establish an immigration process that protects US workers. This key proposal seeks to protect American workers, wages, wage floors, displacement prohibitions, and recruitment requirements. According to the President, the plan would ensure more immigrant visas are granted to the highly skilled workers and the brightest. It would also ensure that all foreign workers are sanctioned by the government to work.

Promote national unity. According to the plan, in order to promote national unity, applicants for immigrant visas have to be fluent in the English language and pass a U.S. civics exam. The President wishes to prioritize young applicants, as they are more likely to build long-term ties and offer lifetime contributions to the United States.

Increase diversity and equality through the Build America Visa. Trump’s plan seeks to establish a point-based merit system in which points are awarded to potential immigrants. Applicants would have to meet a point tally to be eligible for an immigrant visa. The point-based system would have three high-skill categories namely – exceptional academic track records, professional and specialized vocations, and extraordinary talent. Donald Trump drew comparisons with the point-based system in countries including Australia, Canada, and New Zealand, where the percentage of immigrants selected on skill/merit is closer to 60 and even 70 and 75 percent. As such, Trump claims his plan would increase the percentage of immigrants selected on skill/merit by 25%.

Trump believes this would ensure persons with extraordinary achievement and potential have a higher chance of becoming permanent residents of the United States, as well as create a level playing field for all applicants. All of which is supposed to lead to greater diversity.

Donald Trump’s stance on immigration has been his most defining feature as a president and as a presidential candidate. During his presidential campaign, immigration was his signature issue. Also, over his years as President, he has proposed several reforms, and imposed executive orders and policies aimed at curbing illegal immigration as well as reforming the current immigration system. Some of his highly publicized immigration-related actions include imposing a travel ban on seven largely Muslim countries (which faced several legal challenges and had to be revised twice), attempting to end the DACA program, and imposing a “zero tolerance” policy which lead to the separation of children from their families on the southern border. This new immigration plan is the latest in a long line of proposed reforms and executive orders, most of which have amounted to little to no positive change.