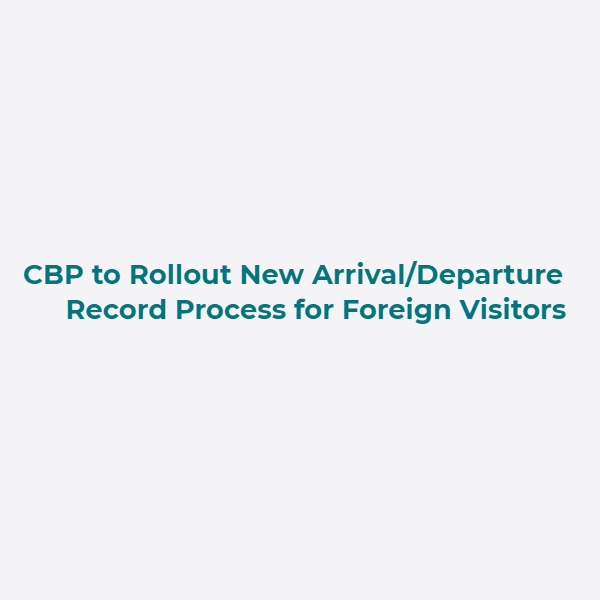 Come April 30, 2013, the U.S. Customs and Border Protection (CBP) will roll out new Arrival/Departure record process for foreign visitors. With the new automation process in place employers, schools/universities or government agencies will be able to access the arrival/departure record information online of foreign visitors arriving in the U.S. The automated process will be applicable to non-immigrant visitors coming to US via air or sea and CBP will phase in the Form I-94 automation through April and May. However, CBP will still issue a paper form I-94 to foreign visitors at land border ports of entry. The new system aims to streamline the entry process for travelers, facilitate security and reduce federal cost (CBP anticipates it could save $15.5 million a year). After automation, travelers can access admission information from their Form I-94 including immigration status or employment authorization, the record number and other admission information at CBP.gov/I94.

Under the new process, a CBP officer will stamp the travel document of each arriving non-immigrant traveler. The admission stamp will show the date of admission, class of admission, and the date that the traveler is admitted until. Traveler’s will also receive on arrival a flier alerting them to go to CBP.gov/I94 for their admission record information.

Earlier, while departing from the United States, travelers would surrender paper Form I-94 to the commercial carrier or to CBP. Under the new automated process, travelers will not need to do anything. CBP will record the departure electronically via manifest information provided by the carrier or by CBP, if travelers did not receive a paper Form I-94.