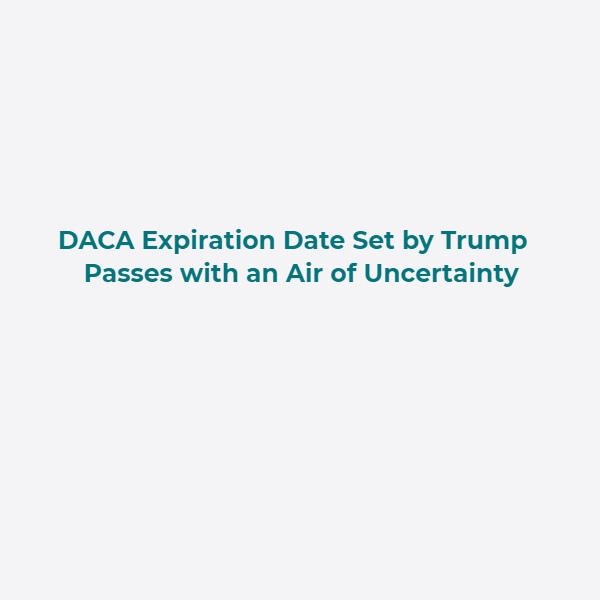 Last year in September, the Trump administration decided to end DACA giving Congress up to March 5th, 2018 to come up with an alternate solution. The expiration date of March 5 was set for the DACA program. This has since passed with a lot of uncertainty as the program is tied up in court proceedings, which is expected to continue deep into the midterm elections. This had led to many DACA enrollees being unclear about their future in a country where they grew up in, a school in and work in.

The DACA program was started by President Obama in 2012 with an executive order on June 15, 2012, called “Exercising Prosecutorial Discretion with Respect to Individuals Who Came to the United States as Children”.

This program gave certain undocumented immigrants protection from deportation and enabled them to obtain work permits renewable every 2 years based on good behaviour. To be eligible to apply, the immigrant had to be younger than 31 as of when the policy was announced (June 15, 2012), and should have entered the U.S. when they were below the age of 16. Lastly, the applicant must have lived in the United States since 2007.

According to Pew Research Center, as many as 1.7 million persons were eligible as of August 2012, when the USCIS started accepting applications.

Obama attempted to expand the DACA program to include more persons, however, Texas and 25 other states sued the U.S. District Court for the Southern District of Texas asking that the implementation of both the DACA expansion and DAPA (Deferred Action for Parents of Americans) be enjoined. After going through the court system, the Supreme Court reached an impasse (4–4). As such, the injunction blocking the expansion issued by Judge Andrew S. Hanen in February 2015 was left intact.

Individuals protected under the DACA program are collectively referred to as ‘DREAMers’ in reference to the DREAM Act which was supposed to allow immigrants brought into the U.S. at young ages to attend university and subsequently become U.S. citizens, however, this bill has not been able to prevail over filibuster in the U.S. Senate.

On September 5, 2017, the Trump Administration ordered the end of DACA, in an attempt to scrap the Obama-era program. According to the memo released Rescission of June 15, 2012, Memorandum Entitled “Exercising Prosecutorial Discretion with Respect to Individuals Who Came to the United States as Children”, all those covered under the DACA program were supposed to lose their protected status and face deportation starting 6 months after the declaration, which fell on March 5, 2018. The president then challenged Congress to find a more lasting solution to the problem within 6 months. However, as March 6 approached there was little apparent urgency on the side of Congress to act before hundreds of thousands lose the protection offered by DACA. In all, around 800,000 persons have received approved DACA protections since the program commenced in 2012. By September 5, when President Trump announced that his administration plans to end DACA, about 689,800 persons were protected by DACA, receiving both protection and work permits, according to data provided by USCIS.

The U.S. Courts Stance on DACA