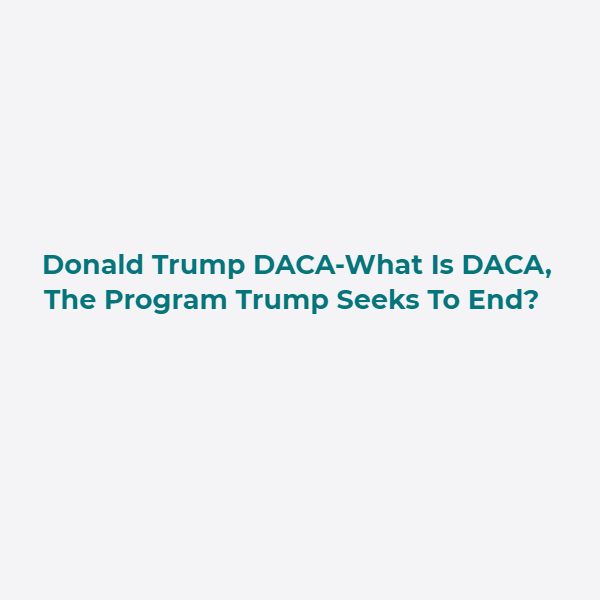 On September 5, 2017, the Trump administration announced their decision to end the DACA program as reported by the White House, Office of the Press Secretary. Created by the Obama administration in June 2012, DACA (Deferred Action for Childhood Arrivals) was a policy that enabled qualifying foreign nationals brought into the U.S  illegally as minors to legally live, work and study in the U.S  on a temporary basis, renewable every two years. Individuals covered by the DACA policy must have entered the U.S. before their 16th birthday; also, they must have been born on or after June 16, 1981.

As of when President Trump announced his decision to rescind DACA, the latest figures from USCIS showed there were nearly 800,000 people protected under the program. These individuals, called DREAMers (named after the failed Dream Act which preceded the DACA program), are largely based in California, Texas, New York, Illinois, Florida, and Arizona.

Preceding the DACA program was the DREAM (an acronym for Development, Relief, and Education for Alien Minors Act) Act. Introduced as the S.1291 – The DREAM Act to Congress by Orrin Hatch (R- Utah) and Dick Durbin (D- Illinois) on August 1, 2001, Congress has failed to pass this bill after several attempts. According to a press release by Obama in 2012, the inability of the U.S. Congress to successfully make the DREAM Act a law was the main catalyst behind Obama’s signing of the DACA program. The Dream Act was designed to grant qualifying alien minors the chance of conditional residency and after meeting requirements, permanent residency

Barack Obama declared the DACA program during the “Remarks by the President on Immigration” speech given at the White House in June 2012. And the USCIS started taking submissions for the DACA program from August 2012. According to USCIS, Out of the 844,931 applications received, the USCIS granted 88% of applications were approved, 7% were rejected, and 5% are pending.

In 2014, a series of immigration executive orders by Barack Obama, which included attempts to create the Deferred Action for Parents of Americans and Lawful Permanent Residents (DAPA) program as well as expand the DACA program through executive actions, was met with lawsuits from Texas and 25 other states in the case entitled Texas v. United States. This lead to Judge Andrew S. Hanen issuing an initial injunction that blocked Barack Obama from implementing these immigration plans. This injunction was left untouched by both a Federal panel and later the Supreme Court. This injunction, however, did not affect the existing DACA policy signed by Barack Obama in 2012. The case is still ongoing.

The DAPA program was a planned immigration policy to allow certain eligible parents of permanent U.S. residents or U.S. citizens to request both deferred action and employment authorization. These eligible parents had to have lived in the United States since 2010. The DACA expansion, on the other hand, was a planned policy to increase both the population eligible for the existing DACA program and the period of work authorization from two years to three years as evident on the USCIS page entitled ‘2014 Executive Actions on Immigration.

Even before Donald Trump became President, he had talked about repealing the DACA program. While campaigning in 2016, Trump promised to terminate the DACA and the DAPA programs, as reported by the LA Times in August 2016.

Finally, on September 5, 2017, during a White House press briefing, Press Secretary Sarah Sanders announced the repeal of the DACA program. Not only did the President move to end the DACA program, he also called on Congress to act. This repeal suspended the implementation of both the DACA status and the granting of EAD to potential DACA beneficiaries.

On the DACA page of the USCIS website, there is a notice with a bold red heading that reads “DACA Has Changed!” The information provided makes it clear that the government is no longer accepting initial DACA requests. However, the government will still adjudicate requests accepted by September 5 when the announcement repealing the program was made. Also, the government has stopped the approval of all DACA advance parole requests. Finally, the USCIS will only deliver judgment on DACA renewal requests received from current beneficiaries whose benefits will expire onSept. 5, 2017, to March 5, 2018. These requests have to be submitted latest by Oct. 5, 2017, for adjudication to take place.

Reaction to the Rescission of DACA

There has been widespread disapproval toward the rescission of the DACA program, with several protests across the country. ABC News reported that there have been protests In Los Angeles, Chicago, Washington DC and even outside the Trump Tower in New York City. In addition, as reported by the New York Times, immigration activists, college presidents, business executives, Democrats and even some Republicans have condemned the current administration’s decision to repeal the DACA program calling it shortsighted and cold-hearted. Barack Obama took to social media (Facebook) to condemn the repeal.

Just as States filed lawsuits against Barack Obama’s attempt to create the DAPA program in 2014, fifteen States and the District of Columbia filed lawsuits against President Trump’s repeal of the DACA program on September 6, 2017 in the case State of New York, et al v. Trump et al. (No. 1:17-cv-05228-ARR-RML). Attorney general of California, Xavier Becerra, and the States of Maryland, Minnesota, and Maine also filed a separate lawsuit against the repeal on September 11.

On September 13, 2017, President Trump and Democrats, Senate Charles E. Schumer and House Representative Nancy Pelosi, held talks in an attempt to protect DREAMers and hundreds of thousands of undocumented immigrants from deportation. Speaking to reporters the next morning, Donald Trump said, “We’re working on a plan for DACA”.

What Can Congress Do To Save DACA?

On September 5, 2017, President Trump took to Twitter stating that, “Congress now has 6 months to legalize DACA…” It appears the future of the DREAMers is up to Congress. What are some ways through which Congress can save the future of current and potential DREAMers?

In all, the future of DREAMers rests on the United States Congress as it does on the President.