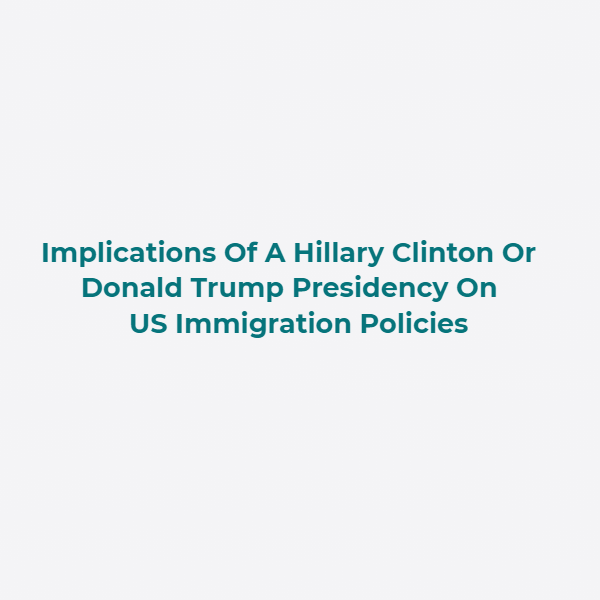 With the U.S presidential elections almost here, the whole world watches to see who will be elected 45th president of the United States of America. This is because the policies of a U.S. president’s administration affect every single country in the world. This is particularly true when it comes to immigration.

According to many such as, Business Insider reporter Louise Liu and NBC News’ Benjy Sarlin and Alex Seitz-Wald, the differences in policies of this year’s presidential candidates are unprecedented and universes apart. This is a sentiment many of us agreed with. This is especially true when it comes to one of the most controversial topics in this year’s elections – US immigration reform. Both nominees propose a reform of the current immigration system.

Presidential candidate Clinton is focused on protecting undocumented immigrants from being deported and putting measures in place to help them integrate into society, while Trump is adamant about building an impenetrable wall between Mexico and the United States and deporting undocumented immigrants living in the United States. This has led to experts from both sides and neutrals as well to voice their concerns. Some points to Trump’s proposals are un-American while others claim Clinton’s proposals undermine U.S. immigration laws.

Clinton policies on immigration include pushing for comprehensive immigration reform in the first 100 days of her presidency. This reform will facilitate the path to citizenship (promote naturalization and support immigrant integration), defending President Barrack Obama’s executive action that will protect an estimated 5 million immigrants from deportation (DACA and DAPA), enabling undocumented immigrants to access the Affordable Care Act so they are not compelled into using ER or primary care. Hillary’s comprehensive immigration reform will push to end family detention as well as push congress to fund more public detention centres while closing private detention centres.

The Republican presidential candidate, Donald Trump, on the other hand, is not a supporter of the comprehensive immigration reform according to NBC news.[6] Trump’s campaign seeks to put American citizens first. Trump calls for mass deportations of undocumented immigrants achieved by creating a deportation force and tripling the number of ICE agents, toughening up the pathway to citizenship, terminating the DACA and DAPA programs, and ending birthright citizenship. He also proposes a reduction of the number of H1-b visas granted annually and casts foreign workers as in competition for limited jobs with American citizens.

Clinton wants measures to be put in place to make it easier for immigrants to become U.S. citizens. Hillary Clinton says she aims to create “a pathway to full and equal citizenship” within her first 100 days as president.

Hillary Clinton also opposes regulations that enforce undocumented immigrants to leave the U.S. before they can begin the process of becoming American citizens. Clinton also proposes measures to lessen the barriers undocumented immigrants face, both economical and lingua, as they navigate the process of becoming U.S. citizens. Hillary Clinton also proposes a National Office of Immigrant Affairs, which is a department that will work on naturalization and integration services. Hillary Clinton is also in favour of sanctuary cities. A Clinton administration will seek to put measures in place in order to simplify the path to citizenship while ensuring national security.

Clinton also felt it was distressing that some American workers have to train their replacements from foreign countries. Clinton has been awfully silent when it comes to the issue of the H1-b visa cap and has not proposed any specific reforms in relation to the H1-b visa, although she has promised to leave high-skills visas untouched in her comprehensive immigration reform plans. [8]

Donald Trump has proposed to depart a projected 11 million immigrants living in the United States without documentation. Donald Trump proposes to increase the workforce of the Immigration and Customs Enforcement (ICE) agents from 5,000 to 15,000. Trump wants Immigration and Customs Enforcement agents to work hand-in-hand with law enforcement on police raids especially on undocumented immigrants who are believed to be associated with criminal activities. Trump’s campaign is adamant about cracking down on and deporting undocumented immigrants.

Although Clinton proposes the detainment and deportation of undocumented immigrants who pose a violent threat to public safety, she is also an avid supporter of the held up executive orders on the Deferred Actions for Childhood Arrivals (DACA) program and the Deferred Actions for Parents of Americans (DAPA) programs by current President Barack Obama. President Barrack Obama expects these programs to protect undocumented immigrants from deportation based on certain conditions.

Clinton wants the protection of the American borders and national security. Hillary Clinton also was in favour of the 2013 Senate immigration bill, which would have sponsored an improved border-security plan, which included extra border fencing. However, Clinton has mocked Donald Trump’s proposal of building a wall along the United States-Mexico border.

On the other hand, the Republican Presidential nominee, Donald Trump’s proposal to build a wall along the United States-Mexico border is probably his most prominent plan. This includes declarations that “Mexico will pay for the wall.” According to Donald Trump campaign, this will cost the Mexican Government a whopping amount of between $5 billion and $10 billion.

Mexican President Enrique Peña Nieto made it clear that Mexico will not pay for the wall. Donald Trump has however reaffirmed his support for a wall on the United States-Mexico border.  According to the Trump campaign, if Mexico cannot make a one-time payment, the United States can force Mexico to pay for the way using many different ways. One example is intercepting wire transferred by initiated by undocumented immigrants.

A Trump administration intends to increase the fees on visas, border-crossing cards, and tariffs. This will have a major impact on U.S. Immigration Policies.

Trump called for “a total and complete shutdown of Muslims entering the United States”. The Trump campaign strongly emphasises the scrupulous screen of all asylum seekers. Trump’s focus shifted to a temporary ban on immigrants with a proven history of terrorism. Trump said this is to prevent further terrorist attacks on the United States following the San Bernardino shootings. However, Clinton opposed the Republican presidential nominee Donald Trump. Hillary Clinton felt this was a dangerous idea, and went against everything the United States stands for as a nation founded on religious freedom.

Clinton has vowed to welcome Syrian refugees and other asylum seekers and give them the opportunity to tell their stories. Hillary Clinton also proposed the acceptance of 65,000 Syrian refugees, as this would help assuage the Syrian war crisis.

The Democratic presidential nominee Clinton on the other hand, vows to close private immigration detention centres. These centres detain an estimated 20,670 immigrants who make about two-thirds of the 31,000 undocumented immigrants detained on a normal day. A Clinton administration will likely move to get Congress to approve funding for more public immigration detention centres.