November 2018 Bulletin: For the Second Month Running, USCIS Will Use Filing Dates As Cutoff for Both Family-Sponsored and Employment-Based Preference Filings 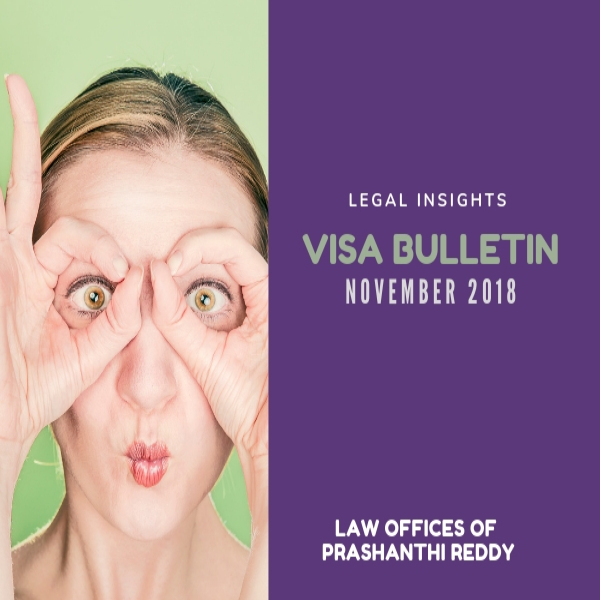 For the second consecutive month, both employment-based filings and family sponsored fillings will use the dates for filing charts. The last time this happened was 2 years ago in November 2016. This means that several persons with priority dates that will otherwise be unavailable if the final action dates were to be used can submit their permanent residency application.

There are no differences between the dates for filing for October and those for November.

For employment-based preference petitions, the dates for filing will be used as the cut-off dates.

On the final action dates front, there are slight movements. This is based on the predictions of Charles (“Charlie”) Oppenheim, Chief of the Visa Control and Reporting Division, U.S. Department of State.

For EB-1 category, all dates remain the stay in November. However, in December, there is expected to be a forward movement for EB-1 India, EB-1 China, and EB-1 Worldwide. Although it is yet unclear just how much movement is to be seen, they will not return to the current in the 2018 calendar year.

For EB-3 Philippines and Other Workers Philippines, there will be a forward movement of one week to June 8, 2017. There should be a little movement for the rest of the first quarter of the FY2018. The slowdown in advancement is because of increased demand caused by substantial advances that occurred over the past fiscal year.

For family-sponsored preference petitions, the dates for filing will be used as the cut-off dates for November 2018.

On the final action date front, there is movement. This is based on the predictions of Charles (“Charlie”) Oppenheim, Chief of the Visa Control and Reporting Division, U.S. Department of State. All the final action dates for family-based petitions advanced apart from FB-1 Mexico and FB-3 Mexico – both will remain on August 1, 1997, and December 22, 1995, respectively. Also, demand for FB-3 India is high, and as reported by Charlie Oppenheim, there has been this much consistent demand in the FB-3 category for any other country.

For November 2018, there are no changes.

1. USCIS. (2018). When to File Your Adjustment of Status Application for Family-Sponsored or Employment-Based Preference Visas: November 2018. Retrieved October 20, 2018,