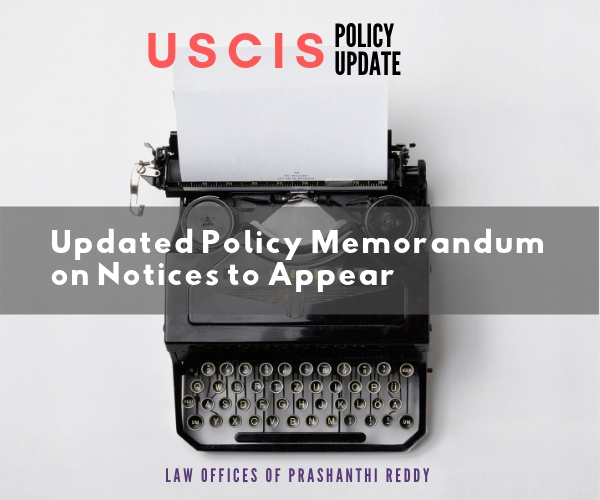 Earlier this year on June 28, the USCIS released an updated policy memo on NTAs that provides guidelines to when USCIS officers can issue Notice to Appear. An NTA, which is a Form I-862, is a document that instructs a foreign national to appear in immigration court.

According to an announcement on September 26, titled ‘Notice to Appear Policy Memorandum’, beginning on October 1, the USCIS may start to issue NTAs to foreign nationals with a denied status-impacting application such as an I-539 (application to extend/change nonimmigrant status) or I-485 (application to register permanent residence or adjust status). The issuance of the NTAs is to be done incrementally.

An NTA will not be sent simultaneously with the denial notice, instead, the USCIS will first issue a status denial notice which is intended to give applicant adequate notice. The USCIS may issue an NTA when the applicant is no longer in a period of authorized stay and has not left the United States. Besides, this updated policy memo will not affect humanitarian applications and petitions and employment-based petitions such as employment-based I-94 (which include H-1b and L-1).

In response to the executive order entitled ‘Enhancing Public Safety in the Interior of the United States’, the USCIS issued a policy memo on June 28. The memo discusses when USCIS offices are issue NTAs and the guidelines they should use. Removable foreign nationals who can be issued NTAs include:

B) Aliens who have engaged in fraudulence, willful misrepresentation, or in the abuse of public benefits.

C) Aliens who have been denied an application for naturalization on good moral character grounds due to a criminal offence.

D) Aliens who do not depart the United States after a petition or application has been denied.

This updated policy memo will not affect cases involving

B) NTA issuance is required by regulation or statute

Employment-Based Petitions Are Not To Be Affected By NTA

On Thursday, September 27 from 2 to 3 p.m. (Eastern Time), a public teleconference was held to provide more details on this Policy memo concerning NTAs.