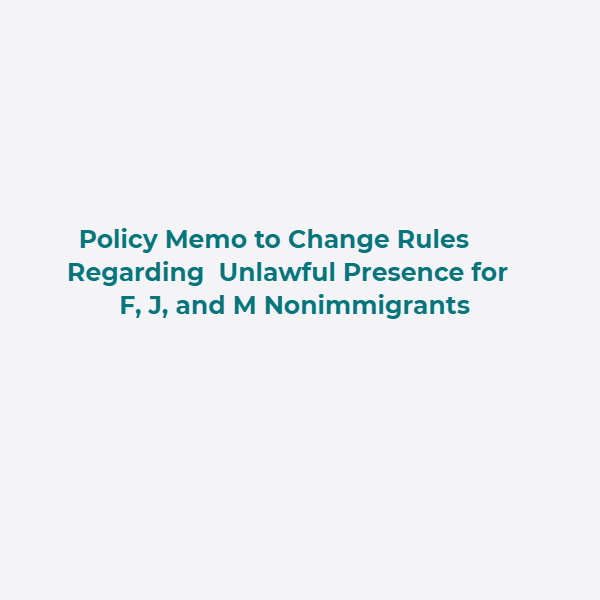 On Tuesday, May 11, 2018, the USCIS published a memo that may change how unlawful presence is determined for foreign persons in the F, J, and M Nonimmigrants status. Scheduled to go into effect on August 9, the USCIS has allowed for public comments up to June 11, 2018.

B) In addition, if the nonimmigrant accrues more than a year, then that person is barred from entering the United States for 10 years.

C) Also, persons who have accrued more than one year of unlawful presence in the United States over multiple stays or a single stay and later enters (or tries to enter) the United States without being authorized to, become permanently inadmissible.

D) In addition, if an immigrant is found to have violated the terms of his or her visa status, then accrual starts after the determination of a status violation by an immigration judge or the USCIS.

A barred foreign nation can only enter the United States with a waiver. The conditions under which the waiver can be acquired is outlined under INA §212(d)(3) waiver.

However, with F-1, M and J-1 status and their dependents, a designation of the duration of status also called D/S is given rather than a certain date of expiration. Under the previous policy, such nonimmigrants did not accrue unlawful presence if they overstayed unless the USCIS or an immigration judge made a formal finding of a status violation. The unlawful presence count then started after the formal finding has been made against nonimmigrants admitted for the duration of status.

Therefore, after his or her authorized status has expired, a student on an F-1, M and J-1 status did not accrue unlawful presence that can result in a 3-year or 20-year bar.

The new policy, however, will change this as persons in F, J, or M Nonimmigrants status whose authorized status (including completion of studies and any optional practical training; and the grace period) has expired, will start to accrue unlawful presence the day after the authorized status has expired. Other conditions under which unlawful presence is incurred is further discussed in the article.

A) If a nonimmigrant in an F, J or M Nonimmigrants status admitted for the duration of status overstays, accrual of ULP started only after the day an immigration judge or BIA makes a formal finding that the immigrant has violated his or her status while adjudicating a request for another immigration benefit (for instead a change of status petition), and not after they begin to overstay pass the D/S.

B) Also for a nonimmigrant in an F, M or J status, ULP accrual also began a day after an immigration judge, or BIA has ordered the deportation, removal or exclusion of a foreign national.

C) In addition, if the F, J, or M Nonimmigrants was admitted for a date certain, then a date after his or her I-94 expires.

As such for nonimmigrants admitted for duration status, the accrual of ULP did not begin on the date when the violation started or the day the removal proceeding stars, but on the date after the immigration judge’s order or a date after the USCIS made a formal such as deny a request for an immigration benefit.

Under the new policy, persons in the F, J or M Nonimmigrants status who are unable to maintain their status starting August 9, 2018, will incur ULP:

A) The day after the completion of the course of program or study. This includes a period of authorized practical training and any additional grace period as determined in 8 CFR 214.2.

D) On the day after an immigration judge, or in some cases, the BIA has ordered the deportation, removal or exclusion of a foreign national.

However, if any of the following conditions has already occurred before August 9, 2018, then accrual of ULP would have already started on the earliest day after the subsequent conditions-

A) If the DHS has already made a formal finding that the foreign national has violated his or her nonimmigrant status while the foreign national was adjudicating a request for another immigration benefit (for instead a change of status petition), accrual of ULP starts the day after.

B) If the nonimmigrant was admitted for a date certain, and the I-94 has expired, accrual of ULP starts the day after.

C) If an immigration judge or Board of Immigration Appeals (BIA) has ordered the deportation, removal or exclusion of a foreign national, accrual of ULP starts the day after.

For an immigrant with an F, J, or M, the ULP would start a day after these conditions have occurred even before August 9, 2018.