SOC Code 2018: The change that impacts all employment-based visa filing 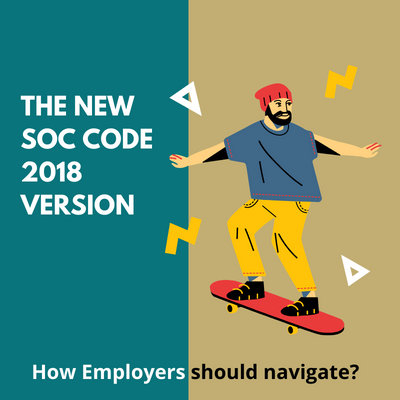 Employers filing for visa applications under multiple employment categories might overlook SOC codes’ importance, and it is just a number describing the job duties and requirements. Many would not realize that selecting the correct code ensures perfect filing and reduces the chance of getting an RFE from USCIS.

What are SOC codes?

SOC is an abbreviation of Standard Occupation classification, a federal statistical standard used by federal agencies to classify workers into occupational categories. Codes have undergone multiple revisions, and the SOC 2018 one is the fifth. The last modification is called the 2010 version, and if we compare both the versions, one can see:

What is the importance of the SOC code in visa applications?

The most notable use of SOC codes is to categorize non-immigrant and immigrant workers; the most common used case of these codes in immigration petitions are

To assign the correct code to any employment-based petition, one must compare the proffered position’s job duties and requirements against the system. It is essential to know the valid code because

What are key things to keep in mind with this SOC 2018 version?

The first and foremost information that one needs to mind:

The second important thing is the significant code changes brought in the 2018 version one need to be kept in mind while filing new employment-based petitions, especially the H1Bs and Green cards, to avoid RFEs. Some of the common changes are:

The code changes seem beneficial from a long-term perspective. The new system is more detailed in terms of covering most existent occupations and adding new occupations.

We at “Law Offices of Prashanthi Reddy” are always there to help employer navigate their filing journey, and with this new code system, we know things can be a bit confusing initially, so for support, one can always write to us at prashanthi@reddyesq.com.