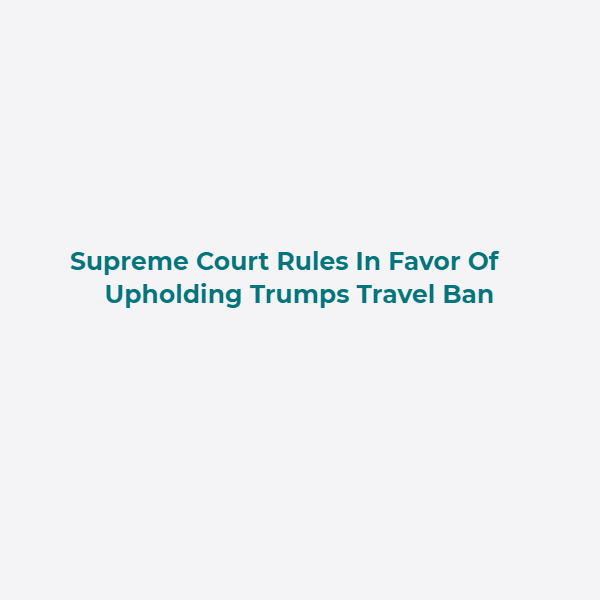 On June 26, 2018, in a 5-4 decision, the United States Supreme Court ruled to uphold Proclamation No. 9645, commonly known as the Travel Ban. In doing so, the Supreme Court overturned the decision of the Hawaii district court, which happened in March 2017 in the case TRUMP v. HAWAII, in which the Hawaii district court placed a temporary restraining order on the travel ban policy as the court judged that the policy was motived by anti-Islam sentiment and was in breach of the Establishment Clause.

Brief History of the Travel Ban

The Proclamation 9645 is the third rendition of the travel ban, with the first being the Executive Order 13769, which was signed on  January 27, 2017. The major points of this executive order included

b) Placement of limitations of entry into the U.S. of foreign nationals of Iraq, Iran, Somalia, Libya, Syria, Sudan and Yemen.

c) Suspension of the admission of refugees from Syria.

1) Capping the number of refugees allowed into the United States for FY2017.

a) Replacement and revoke of Executive Order 13769

c) Placement of limitations of entry into the U.S. of foreign nationals of Iran, Somalia, Libya, Syria, Sudan and Yemen for 90 days minimal

d) Suspension of the admission of refugees for 120 days

This new executive order was restrained by a temporary restraining order issued by Judge Derrick Watson of the United States District Court for the District of Hawaii, which stopped the government from enforcing several provisions of the order. The Supreme Court partially upheld the executive order on June 26, 2017, in response to an appeal by the Trump administration. The third rendition of the travel ban came on September 24, 2017. Called the Presidential Proclamation 9645, this proclamation expanded on and defined the previous executive order. Under this proclamation, countries affected by the ban include Chad, Libya, Iran, North Korea, Syria, Somalia, Venezuela, and Yemen. Sudan, which was present in the previous executive order, was removed. In April 2018, Chad was removed from the list of nations affected by the ban, as the nation met “the baseline security standard of the United States”.

According to Chief Justice John Roberts, two main issues were the focus of the ruling these include

Does President Trump exceed his authority under the INA? As according to the majority opinion delivered by Chief Justice Roberts, the Supreme Court rules that the restrictions imposed were in fact within the core executive responsibility and that the Supreme Court does not have the necessary competence needed to substitute its own judgment for the resident’s when it comes to matters of national security. Moreover, given the administration’s worldwide, multi-agency review process, the waivers and exemptions included in the proclamation, the proclamation can reasonably be comprehended be as a result of a justification independent of unconstitutional grounds.

Not every Justice agreed, Justice Breyer dissented focusing on the waiver program and other exemptions of the proclamation. He cited anecdotal evidence, selective statistics, and a declaration from unrelated litigation as evidence that not enough foreign nationals are benefiting from the exemptions or the waivers.

Does the Proclamation violate the Establishment Clause of the First Amendment? The argument that religious hostility against Islam is one of the factors that motived this proclamation was considered. The respondents claimed that the proclamation was not motivated by national security concerns but by animus towards Muslims. The government, in turn, argued that although many of the nations the ban is imposed on are Muslim-majority counties, the majority of Muslim-majority countries are not subject to the restrictions. The court, therefore, decided that the restrictions are facially neutral toward religion. Justice Robert drew attention to the fact that the proclamation covered only 8 per cent of the global Muslim population, and included countries that in the past have been designated by past administrations or Congress as posing a national security threat. In addition, Justice Robert expressed that three Muslim majority countries have also been removed from the policy.

Countries Affected By the Proclamation

In concluding the majority opinion, Chief Justice Roberts expressed that three added features to the entry policy support the government’s claim that the proclamation is of legitimate national security. This includes the removal of three Muslim-majority countries – Chad, Sudan and Iraq from the list of restricted countries since the introduction of the travel ban in January 2017. Secondly, with the countries still under entry restriction, several exceptions have been made to several visa categories such as allowing persons with F, J and M visa statuses from Iran, and other nations under the ban entry into the United States. Thirdly, the waver program created by the proclamation is available to all applied to those seeking nonimmigrant or immigrant entry into the U.S. As such, “the Government has set forth a sufficient national security justification to survive rational basis review.”