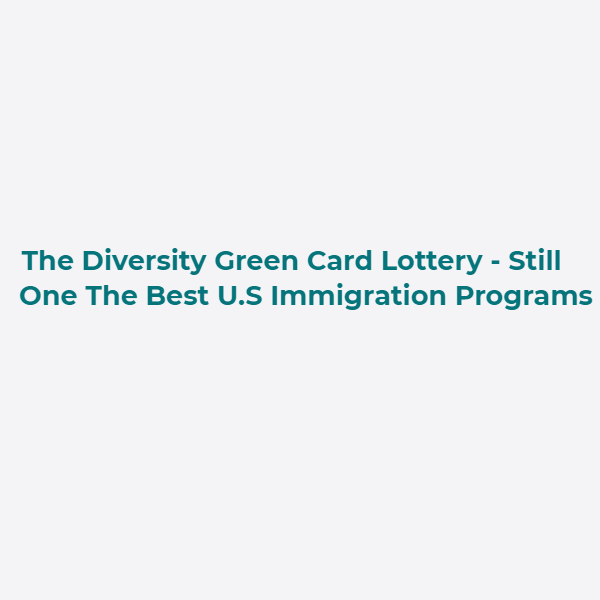 On the 2nd of May 2017, fourteen million anxious individuals all around the globe including people in the United States logged onto the State Department website to check if they had won the Diversity Visa Lottery also known as the Diversity Green Card Lottery (according to Washington Post).

The current Diversity Green Card Lottery has coincided with the intense immigration debates going on in the United States at the moment. And although president Trump is yet to comment on the DV lottery program, it seems to clash with the president’s call for a merit-based immigration system. Furthermore, there are at least two legislations in Congress seeking to eliminate the DV lottery programs according to the Washington Post. According to Sen. Tom Cotton (R-Ark.), the co-sponsor of one such legislation, the DV lottery is rife with fraud and does not deliver diversity nor does it advances economic or humanitarian efforts. As such, this legislation, called the RAISE Act, seeks to eliminate the DV lottery.

Supporters of the DV lottery, on the other hand, believe the lottery program not only improves the public relations of the United States,it also upholds the ideals upon which the United States was established. Many feel this may be their last chance of becoming a permanent resident of U.S. through the Diversity Lottery Program.

Who Is Eligible To Apply Diversity Green Card Lottery?

The DV lottery is one of the simplest ways to acquire a green card. This is because entrants need not have family members or job positions in the United States. The only requirements are that – entrants are adults with at least a high school diploma (or an equivalent of a high school diploma) or 2 years of work experience in the last five years. The O*Net Online database of the U.S. Department of Labor is useful for checking if work experience is sufficient. The 50,000 winners are also eligible to bring along their spouses and children. However, nationals of countries that have sent 50,000 or more citizens to the United States in the past five years (such as India, Mexico, China, and Canada) are not eligible to apply for the DV lottery.

When And How Can Applicants Register?

In 2003, registration for the DV lottery was moved online. This led to a dip in the number of entrants. The number has since returned to normal. Online registration periods usually run from 0ctober 1 to November 3 every year, give or take a few day. During the latter periods of registration, applicants usually have difficulties accessing the DV lottery program website due to the high volume of traffic the site handles.

Entrants can begin checking the list of winners the following year in May. Registration for the fiscal year of 2018 (DV 2018) begun in October 2016 and ended in November 2016. The Kentucky Consular Center, responsible for administering the DV lottery program, sends out no email alerts. It is fully up to entrants to check whether they were selected by visiting the DV lottery program’s website.

Entrants for DV 2018 can check their status starting on May 2, 2017. Registration can be done at the DV Lottery site: DV lottery website

Increasing the Odds of Winning

One way to increase the odds of winning is for entrants to apply with their spouses. If one entrant wins, the other can enter the United States as a derivative spouse. Also, there is no limit on the number of people eligible to register from the same family.

What Happen After You Win?

Even if an entrants name is drawn, that does not guarantee him or her a green card. It only gives the entrant the opportunity to apply for permanent residency (green card). Over half of the applicants chosen do not acquire green cards. Applicants who have applied can check their entrant status online on DV lottery website

If a chosen applicant is situated the United States under a non-immigrant visa,they will need to follow the process outlined on USCIS Website.

If a chosen applicant lives outside the United States, a process known as consular processing is undertaken USCIS

While the chances of winning the DV lottery are slim and entrants have to wait in line, it is one of the most straightforward ways of becoming a documented permanent resident immigrant in the United States. Winners can even apply forU.S. Citizenship later. However, winning the DV lottery is a mixed blessing for many, as winners have just six months to move to the U.S. winners in order to acquire a green card. This means winners of the lottery have to leave behind family, friends, careers, education and start life afresh in a new place.