The Impact Of United States Presidential Election, 2016 On Immigration 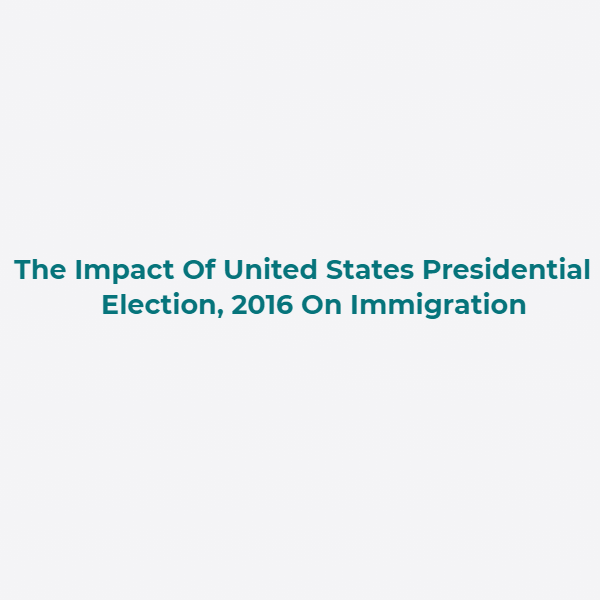 According to Huffington Post contributor, Nolan Rappaport (an Immigration Lawyer), “President-Elect Donald Trump will soon discover that his ten-point immigration plan cannot be implemented.” Is it safe to assume that President-Electdrew up policies and plans on immigration mainly to galvanize support rather than create a workable immigration plan for the United States? [3]

One of Donald Trump’s promises that was more vocal during his campaign was the proposal to build an impenetrable physical wall along the Southern Border.[8] But just how feasible is this proposal?
Since 1990, the United States has been constructing barriers along the California coast of the U.S. Also, both the Democratic and Republican parties have supported federal bills for the construction of a barrier along the United States-Mexico border. For this reason, 27 democrats including Hilary Clinton voted in favour of the Secure Fence Act of 2006. This bill approved the construction of 700 miles (1000 km) of physical barriers along the United States-Mexico border. In addition, the Secure Border Initiative was an attempt to erect a virtual wall across the entire 2000-mile southern border. This was a very costly failure. This makes it very difficult and unlikely that Trump will succeed in erecting an impenetrable wall along the entire southern United States-Mexico border.
Also, Economists postulate that this idea/proposal can play a part in damaging economic growth in Employment-Based Visa For USA  , creating a shortage of labour, which will cause an increase in wages and prices. Donald Trump’s administration wants to deport approximate 11 million immigrants. The deportation of such a huge number of foreign nationals will lead to a noticeable reduction in the American workforce. This could very likely lead to a fall in actual Gross Domestic Product and potential growth. [5]

Another proposal of the President-Elect is to end catch and release. Catch and release is an occurrence that has been going on for years now. Mexicans caught trying to cross the border without proper documentation are detained and deported back to Mexico. However, The Mexican government cannot accept foreigners, other than Mexicans (OTMs). This means arrangements have to be made to have them deported to their countries of origin. This takes time. Because the Department of Homeland Security does not have sufficient available detention facilities to detain these undocumented immigrants, the DHSreleases these individuals and most of the time the DHS never hear from these individuals again.
A substantial amount of capital is needed in order for the Trump administration to provide the necessary facilities needed to end catch and release. Is this a feasible undertaking? [5]

According to President-elect Donald Trump’s Ten-Point Immigration Plan, his administration plans on deporting every single immigrant who commits an offence. [7]The United States immigration laws just do not make every criminal offence grounds for deportation. Crimes that can lead to deportation can be found on Section 237(a) of the Immigration and Nationality Act (I.N.A.). Examples of such crimes include drug-related crimes, domestic violence, fraud, espionage, firearm trafficking, money laundering, sabotage, murder, rape and any form of “aggravated felonies”.  Not every moral turpitude crimes are grounds for deportation of a permanent resident unless it was committed within five years of securing permanent residence status or involves two isolated offences involving moral turpitude. Also in some cases, crimes, such as Driving Under the Influence (DUI)as a permanent resident, do not result in deportation. How is the Trump administration going to address this issue? [5][10][11][17] Also, during the Obama Administration, deportation numbers are already the highest ever, with the number of deportees at 2.5 million from 2009 to 2015. [12]

Donald Trump’s administration plans to end sanctuary cities (cities that do not cooperate with the Department of Homeland Security (DHS) on matters concerning immigration enforcement). He will need the backing of the United States Congress in order to do this, and congressional representatives do not like to cooperate on matters that might affect their constituents negatively.[5][7]

Suspend the Issuance of Visas to Places Where Satisfactory Screening Cannot Be Guaranteed
The resources and personnel needed to undertake such a screening task is just not available even in countries where it is possible. [5]

Ensuring Other Countries Take Back Their Nationals When the United States Deports Them
According to U.S. Immigration and Customs Enforcement (ICE), statistics for the fiscal year of 2016 released 19,723 criminal foreign nationals with a total of 64,197 convictions. These convictions include1,347 counts of domestic violence convictions, 1,728 counts of assault convictions, 101 counts of homicide, 12,307 counts of driving under the influence of alcohol convictions.216 counts of kidnapping. 320 counts of sexual assault and 352 counts of commercialized sexual offences. [4] Out of all convictions, only 89 criminal foreign nationals were released because their home nations did not agree to take them back. [4][5] This shows the Obama administration is already doing a very good jobwhen it comes to ensuring other countries take back their deported nationals.

The Full Implementation of the Biometric Entry-Exit Visa Tracking System :

This system is supposed to make a record of every entry and exit of a foreign national in and out of the United States. Donald Trump’s administration will make sure this system is available at every air, sea, and land port. This proposal, however, has some drawbacks.
Namely, having such a system implemented at all land ports is nigh impossible. The United States would have to input a million entries every year at the United States-Mexico border alone. There just is not sufficient time to implement this and there would not be sufficient space for exit lanes.
Also, will a biometric entry-exit visa tracking system have any enforcement value? No, the system will identify foreign nationals who have overstayed but the system cannot provide further information on their location. Because of reason, an entry-exit visa tracking system was blocked in 1996.[5]

Turn Off the Jobs and Benefits Magnet

One way to turn off the jobs and benefits magnet is to implement the employer sanctions introduced by the Immigration Reform and Control Act (IRCA) of 1986. People have been trying to implement the employer sanctions of the IRCA since 1986 but to no avail. The employee sanctions of the bill made it illegal to employ undocumented immigrants continue to employ undocumented immigrants or employ workers without first checking their identity and employment eligibility.[15] It is also important to keep in mind that when it comes to the reform of the H-1B program, President-Elect calls for an outright end to the program, which will affect foreign nationals seeking employment in the United States.Donald Trump also calls for an increase in the prevailing income earned by entry-level foreign employees on the H1b visa. This is to discourage U.S. businesses from employing foreign nationals. This will affect the tech sector in particular with both Bill Gates and Mark Zuckerberg calling for an increase in the H1b cap. [9][16]

Reform Legal Immigration to Serve the Best Interests of the United States of America and U.S. Workers
Donald Trump’s administration wishes to reform the legal immigration system (including ending the H-1B program) but that will not happen without strong bipartisan support. This is very unlikely. [5][3][9][7]

The Law Offices of Prashanthi Reddy, PLLC – established in the heart of New York City, is a full-service Immigration Law Firm in NYC exclusively representing clients in dealing with tough legal matters