US Immigration Visa Predictions For 2017 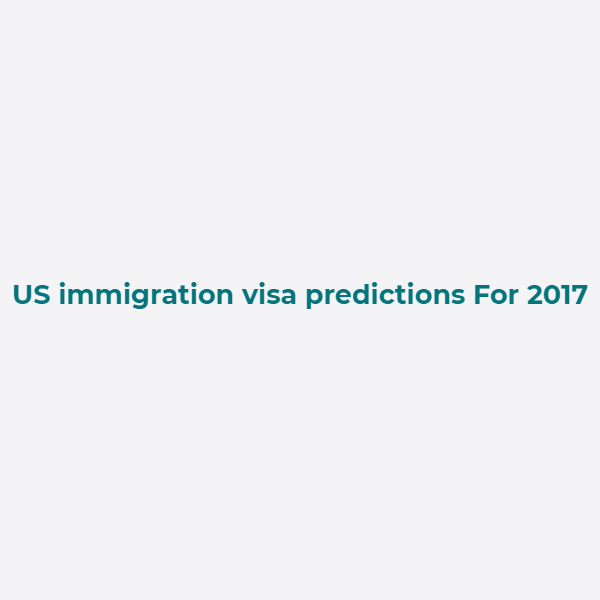 The Bureau of Consular Affairs of the Department of State releases the visa bulletin (this details the limits on both employment-based immigration to the United States) monthly. After each month’s release Mr Charlie Oppenheim, the DOS (Department of State) Chief of the Visa Control and Reporting Division provides his breakdown and analysis on predictions, trends, and movements of various immigrant preference categories to the AILA. With the release of the Visa Bulleting for December 2016, these are the high points of Mr Charlie Oppenheim predictions for 2017.

Highlights from the December Visa Bulletin

Mr. Charlie Oppenheim reminded the AILA of the December 9, 2016 expiration date of the immigrant investor pilot programs (I5 and R5), and the non-minister EB-5 special immigrant category.

Mr. Charlie Oppenheim forecasts that Employment-Based Immigration EB-1 India and EB-1 China will be subject to a FAD (final action date) at some point, likely sometime in early 2017. EB-1 China is very close to reaching the country’s limit, while EB-1 India is very close.

EB-2 Worldwide / Philippines/ Mexico: Mr. Charlie Oppenheim forecasts that EB-2 Worldwide/Philippines/Mexico will be subject to a cut-off date by July 2017 this is due to the substantial demand.

EB-3 Worldwide: although Mr. Charlie Oppenheim warns about the increasing demand for the EB-3 Worldwide, he does state that he is unsure if the demand will remain the same, or not.

EB-3 India against EB-2 India: the EB-3 India upgrades have placed the EB-2 India under much pressure. Mr. Charlie Oppenheim hopes the EB-2 India’s FAD will progress into 2009 in the current fiscal year (2017); he is, however, uncertain of when it will occur. Because of the heavy demand of the EB-2 Worldwide, there is little,if any unused visa numbers left to be reallocated to EB-2 India. Mr. Charlie Oppenheim forecasts that the EB-3 India will move up a week, remain the same for some months, move by a week and remain the same again in 2017.

EB-3 China against EB-2 China: Currently, EB-3 for China is leading of EB-2 China by 282 days (9 months 9 days). Mr. Charlie Oppenheim forecasts that this difference will continue to reduce; he is, however, uncertain about how the fast the closing in the difference will be. The anticipated influx of immigrants downgrading from EB-2 China to EB-3 China due to the fact that the EB-3 is ahead of the EB-2 by such a large margin. This has caused the DHS to limit the forward movement of the EB-3 China.

Concerning the expected movement in of the EB-4 El Salvador/Honduras/Guatemala over the next 12 months, Mr. Charlie Oppenheim said, “This is very difficult to predict because the State Department lacks information regarding the volume of cases in progress at USCIS in this category and does not know the rate at which USCIS continued to pre-adjudicate cases after the final action date was imposed. We are aware that there was a very large volume of EB-4 Mexico cases already processed with 2015 and 2016 priority dates, and this is why we imposed a cut-off date for December. Previously, we expected that a cut-off date would not be required until early summer. Despite the high demand, at this time we do not anticipate a retrogression of the EB-4 final action date for these four countries this fiscal year, but because of the lack of visibility into USCIS data, we will continue to monitor the situation closely.”

Concerning the EB-4 annual country limit for El Salvador, Guatemala, Honduras, and Mexico, Mr. Charlie Oppenheim said, “None of these countries has reached the annual limit for this fiscal year yet, but we expect them to do so early in Fiscal Year of 2017.”

EB-3: EB-3 China moved by about 2 ½ months. This means EB-3 China is still ahead of EB-2 China. Mr. Charlie Oppenheim predicts this gap will gradually reduce over the course of 2017. There was also significant movement in the EB-3 Philippines category, the EB-3 advanced by 2 months.

Also, the EB-1 of both India and China is expected to be no longer current later on in the FY. This is because of the large quantity of employment-based adjustment cases filed late last winter. EB-3 India is expected to advance by just a week or not at all every month in 2017.

Family Immigrant Visas For most countries, the F1 advanced by 5 ½ weeks, while the other family categories saw little advancements.