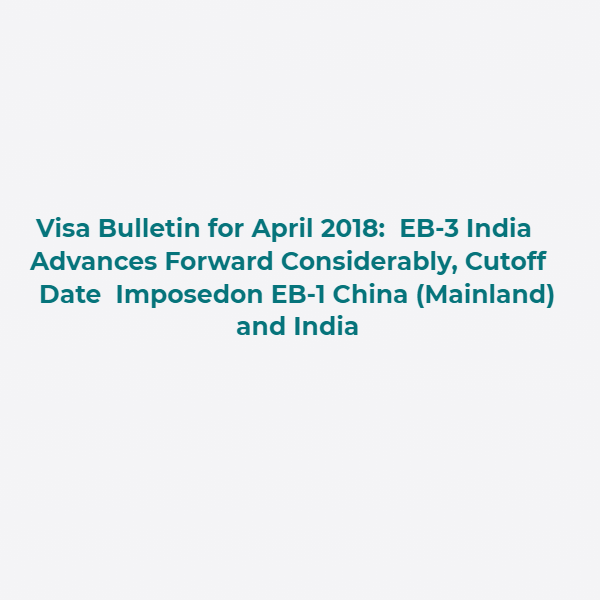 The Visa Bulletin for April 2018 was made available on March 9, 2018, by the U.S. Department of State. This bulletin will be effective starting April 1, 2018. There has been some significant movement in the April bulletin as compared to that of March. In summary, the major changes include a cutoff date that will be imposed on EB-1 visas for both China (Mainland) and India. The EB-2 for China moved by almost eight months, while it moved by just a week for India.

EB-2: The movement was just by a week for India(December 22, 2008). For China, the advancement is huge by nearly 8 months (August 1, 2014). The final action date stays current for all other regions including Mexico, the Philippines, El Salvador, Honduras, and Guatemala. This visa category is for personnel whose immigration is in the national interest, personnel with advanced degrees and personnel with exceptional skills.

EB-3: The third preference category (which comprises of professionals, skilled workers, and other workers) sees the final action date for China leap by 7 months to June 1, 2015, while India sees a movement of over a year to February 1, 2008. For the Philippines, the cutoff date is January 1, 2017. The cutoff data stays current for other regions including El Salvador, Honduras, Guatemala, and Mexico.

EB-4: For the fourth preference (EB-4) not including certain religious workers, Mexico sees the final action date move by 5 weeks to August 8, 2016. The cutoff date for El Salvador, Honduras, and Guatemala remains at December 1, 2015. The EB-4 is issued to”special immigrants”.

EB-5: The fifth preference category EB-5 Immigrant Investor Visa, Non-Regional Center sees no change as China’s cutoff date is July 22, 2014, and for the rest of regions of chargeability, the date is current for April 2018.

Others: Certain Religious Workers and 5th Regional Center (I5 and R5) cutoff dates are unavailable.

F3:The Third Preference of the Family-Based immigration visa Categories sees Mexico’scutoff date at July 8, 1995, and the Philippines at March 22, 1995. This category is issued to married children of any age of citizens of the United States.