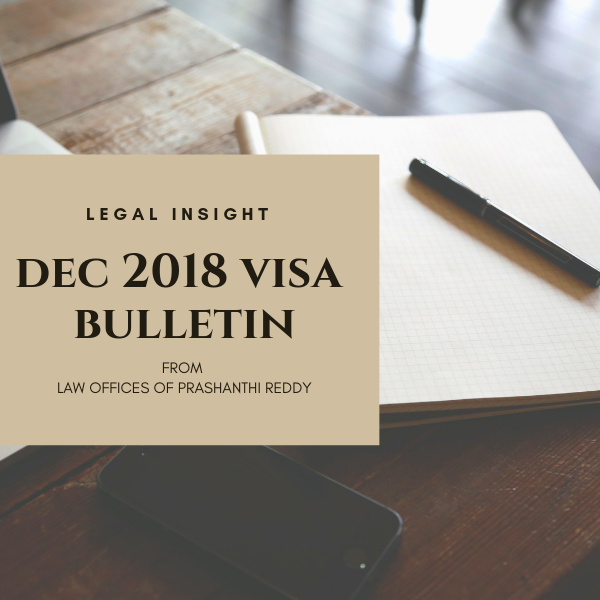 Every month, Charles (“Charlie”) Oppenheim – Chief of the Visa Control and Reporting Division, U.S. Department of State, provides explanations and predictions on visa bulletins and visa availability for upcoming months. Based on these predictions and insights, the following should be expected this December. Final Action Dates serves as cutoff dates in this article.

For the current visa bulletin, visit – https://travel.state.gov/content/travel/en/legal/visa-law0/visa-bulletin/2019/visa-bulletin-for-december-2018.html. You can also visit “https://www.uscis.gov/green-card/green-card-processes-and-procedures/visa-availability-priority-dates/when-file-your-adjustment-status-application-family-sponsored-or-employment-based-preference-visas-december-2018” to find out when to file your adjustment of status application.

EB-1 – For the EB-1 category, Mr. Charles Oppenheim anticipates that all Final Action Dates will move forward by three months this December. This affirms predictions made in October, this year. Over the coming months, we should anticipate more movement in this category. Currently, final action dates for EB-1 El Salvador, Guatemala and Honduras, Philippines, and Mexico is July 1, 2017. This cutoff date is expected to reach June 1, 2018 in eight to twelve months’ time. Similarly, final action dates for EB-1 India and China is September 1, 2016 for this month. The cutoff date for EB-1 India and EB-1 China is expected to reach October 1, 2017 in eight to twelve months’ time

India’s EB-2 and EB-3 Movements – For the month of December, EB-2 India is a month ahead of EB-3 India. However, Mr. Charles Oppenheim predicts that EB-3 India should surge past EB-2 India over the coming months. This would most likely lead to downgrading from EB-2 India to EB-3 India, a common phenomenon for the corresponding China categories. Currently, EB-2 India is April 1, 2009, while EB-3 India is March 1, 2009.

In a conference, Mr. Charles Oppenheim gives a more detailed account into expected EB-2 India movement. Because of the large number of pending I-485 filings for EB-2 India category, it is likely to take up to 5 years to process all EB-2 cases for Indian nationals with priority days before January 2011. As such, Indian nationals on the EB-2 status with priority dates after January 2011 should expect a long wait.

EB-3 Philippines and Other Workers Philippines – Similar to last month, this category sees a movement of one week from June 8, 2017 to June 15, 2017. In a continuing trend, there should be little movement for the first half of the current fiscal year.

EB-5 (Regional Center and Non-Regional Center) – For the EB-5 category is current for all countries apart from Vietnam and China. Over the past few years, there has been a sharp increase in EB-5 filings particularly from India and South Korea. This will likely affect future cutoff dates. Future cutoff dates for EB-5 India and EB-5 South Korea is expected to retrogress due to this sharp increase in filings. Also because of the lengthy processing time for immigrant petitions filed for EB-5 cases (an average of 2 years), it is expected that even cases filed while priority dates are current may still be affected by the retrogression as the cases would be pending when cutoff dates retrogress.

According to Mr. Charles Oppenheim, the amount of time it will take for immigrant visas to be available to foreign nationals who filed for immigrant petitions filed for EB-5 cases (I-526 petitions) on October 30, 2018 is as follows – South Korea: 2.2 Years, India: 5.7 Years, Vietnam: 7.2 Years, and China (Mainland): 14 Years

I will provide updates on any movements and expected movements you need to be aware as of when they come.