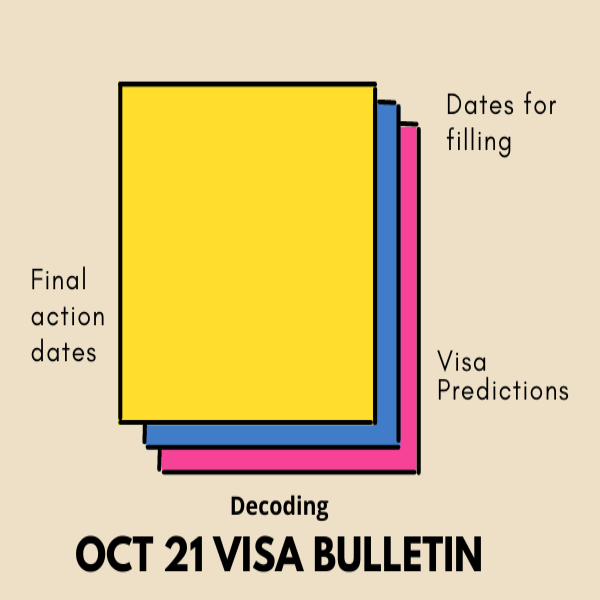 The October Visa Bulletin has been a disappointment for most, though the dates for filing have been allowed which is a relief for some, the date for filing for EB-3 has retrogressed by a year since October 2020 and have been retrogressed by two months since last month. Another piece of bad news for EB-3 is the hint that EB-3 will retrogress in November, this is a sharp turnaround from the previous predictions of no retrogression at least until the end of this Fiscal year, promised by Charlie Oppenheim, the Chief of Visa Control and Reporting Division, who is a household name with many IV applicants. As per his latest updates, it may soon become necessary to retrogress EB-3 as he has been updated by the USCIS that there are sufficient applications filed to use up the existing visa number available for this year and more. The downgrades from EB-2 to EB-3 filed by Indian Nationals in October and the following months are sufficient to use up the worldwide availability of Visa Numbers, therefore, the need for Retrogression in EB-3 India. He has also said that USCIS has been working at a much faster pace than expected, processing 7-8 thousand applications each month, which has also increased the use of the numbers. Charlie has also stated that he sees no point in moving the numbers forward if USCIS is not able to process cases, as this only increases the backlog. He has confirmed that 150,000 spillovers for this year from the Family-based categories have been moved to the Employment visa number pool, however, we are not seeing any forward movement as the pending applications are sufficient to use up these numbers.

EB-1: All countries will remain current

Prediction for the next 6 months

EB-1: Expected to remain current for all countries

EB-2: Will remain current for other countries, not much movement for India and China predicted

For any further legal advice on immigration-related issues write to the attorney at prashanthi@reddyesq.com