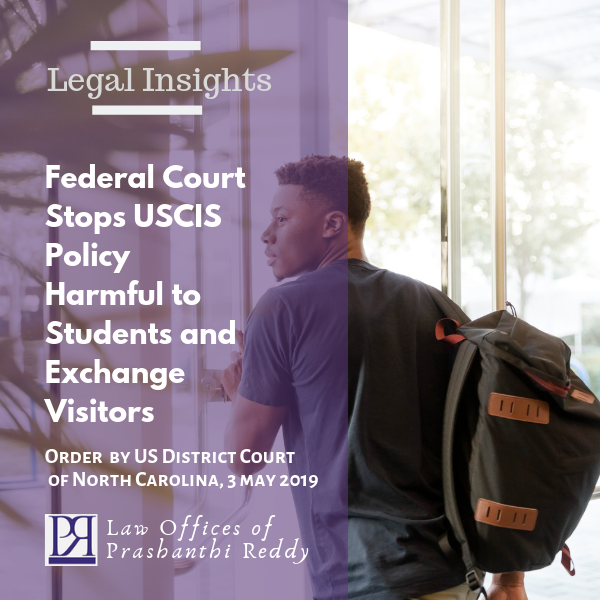 On May 3, 2019, the U.S. District Court for the Middle District of North Carolina issued a nationwide preliminary injunction that temporarily stops the USCIS from implementing the policies of the policy memo – “Accrual of Unlawful Presence and F, J, and M Nonimmigrants”. This injunction was put in place as the court decided that the plaintiffs (Guilford College et al) were likely to succeed in the case of Guilford College et al v. McAleenan et al. The federal judge determined that the changes issued by the USCIS in the policy memo constituted as a “legislative rule” and as such, the government should have complied with the Administrative Procedures Act which indicates that the rule has to be published in the Federal Register and provide a period of public comment [under U.S.C. § 553]. Judge Loretta C. Biggs also concluded that although the USCIS allowed for a period within which the public could comment on the policy changes, a reasoned response was not provided. In addition, according to Judge Biggs, the policy memo redefinition of unlawful presence rendered both ‘unlawful status’ and ‘unlawful presence’ synonymous, while Congress (through the Immigration and Nationality Act) purposely distinguished between the two terms.

Over sixty diverse institutions of higher education from twenty-four states and the District of Columbia have signed onto an amicus brief in support of the plaintiffs’ motion for preliminary injunction and partial summary judgment.

The policy memo, in question, is called “Accrual of Unlawful Presence and F, J, and M Nonimmigrants” and was published on May 10, 2018, by the USCIS. This memo proposed changes to the way ULP (Unlawful Presence) is accrued for F, J, and M nonimmigrants – these include academic students, exchange visitors, and vocational students. This policy went into effect on August 9, 2018.

Due to the preliminary injunction, the USCIS will revert to the previous policies outlined in AFM Chapter 40.9.2.

Before the policy memo went into effect on August 9, 2018, persons on the F, J, and M status (admitted for duration of status (D/S)) started to accrue ULP only after they have been notified by the Department of Homeland Security (DHS) or the Executive Office for Immigration Review (EOIR) that they are no longer in lawful status. This happens when the DHS makes a formal finding, or a judge ordered the exclusion, removal or deportation of the nonimmigrant.

In summary, according to the policy changes an F, J, and M nonimmigrant starts accruing ULP the day after they violate any terms of their status even if they are not notified of the violation. This can prove to be problematic, as students and J exchange nonimmigrants are usually not admitted for a date certain. For persons admitted for a date certain, the date on which the visa expires is clear and ULP accrual starts the next day – which is easy to determine. On the other hand, students admitted for duration of status have a lawful status as far as they are students, in the grace period or in a practical training period. They cannot overstay pass an already established certain date. It’s not uncommon for students to unwittingly lose their studentship temporarily as a result of inadvertent errors which are made by their Universities International student advisors (DSO) on the SEVIS website, also they sometimes loose status based on incorrect advise given to them by the DSO. Also, a student may defer or drop a course of study temporarily. If the new policy memo is to be in effect, a student nonimmigrant can start accruing ULP unexpectedly and unwittingly. The changes proposed by the policy memo will make it easier for international students in the United States to face future reentry bars.

According to Haverford College and the New School (two of the plaintiffs in the case of Guilford College et al v. McAleenan et al), these policy changes resulted in students dropping out of their institutions; students who otherwise would not have dropped out.

Impact of the Court’s Injunction:

While the injunction isn’t permanent, it will stop the USCIS from applying the policies outlined in the policy memo – “Accrual of Unlawful Presence and F, J, and M Nonimmigrants”. While the injunction is in place, students and J exchange visitors will only accrue ULP if they receive a formal finding from the USCIS or an immigration judge orders their deportation, removal or exclusion. Since this injunction is based on merits that the plaintiffs are likely to succeed, it is not guaranteed that Judge Biggs’ current decision will mirror the ultimate verdict of the case.

When the USCIS or an immigration judge determines that a student is out of status, ULP is backdated to a date which defendants determine that the student initially fell out of status. In addition to the strenuous processing delays that plagues the immigration system, because determinations on whether an international student is out of status or not are made when students apply for new immigration benefits, the backdated ULP counting will result in tens of thousands of F, J, and M nonimmigrants subject to reentry bars without opportunity to remedy the situation as this law is retroactive. Summarily, the August 2018 policy changes will negatively and unfairly affect international students if upheld.

At the moment, all responses to the injunction are due by the end of the month (May 30, 2019). We will continue to closely follow all developments in this case so as to keep you up-to-date and well informed.