How the Biden Administration Could Impact Business Immigration 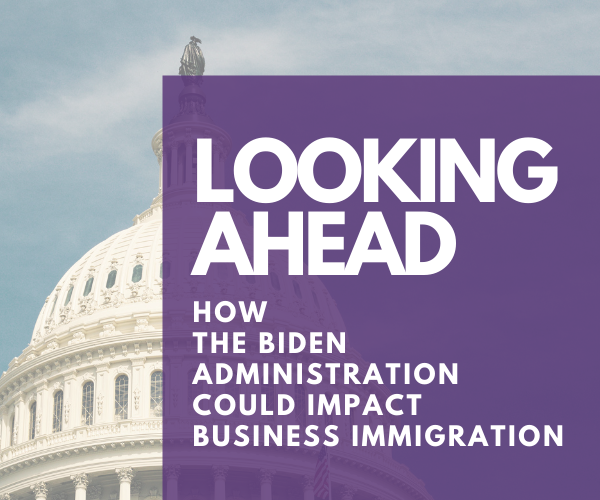 Joe Biden was sworn in as the 46th President of the United States on Wednesday, calling for unity as he assumed leadership of a country ravaged by a pandemic and the recent deadly storm of the United States Capitol. During their campaigns, the Biden team had proposed one of the most robust and aggressive immigration policies in recent history. The proposal emphasizes the important history of immigration in the United States, the rich cultural and social accomplishments made by immigrants, and the economic advantage of bringing to America the best and brightest people in the world. Although it is clear that we should expect a more accommodating vocabulary than that of the previous government, the amount of actual change he will be the effect is yet to be seen.

Restricting immigration had been a focus of the outgoing Trump administration since its early days when it issued the travel ban on seven Muslim-majority countries, and this has continued into Trump’s final year in office. The Trump administration has tightened immigration laws on those authorized to seek refuge in the US and promoted a merit-based immigration system to safeguard US employees. In 2017, his administration also sought to terminate the Deferred Action for Childhood Arrivals (DACA), but in June 2019, the Supreme Court blocked its attempt.

A final rule amending the H-1B visa cap selection process was announced by the US Citizenship and Immigration Services (USCIS) on January 7. As compared to the existing randomized lottery scheme, according to the notification, the newer system would prioritize salaries to protect US jobs and ensure that H-1Bs are assigned to the creme de la creme.

According to Joseph Edlow, the USCIS deputy director for policy, the current random selection process of H-1B makes it difficult for companies to schedule their hiring, does not exploit the program to compete for the best and brightest international workforce, and has primarily resulted in the annual influx of foreign labour put at the expense of US employees in low-wage positions.

This final rule will be in force 60 days after its publication, on 9 March, in the Federal Register But will be further extended to March 21, 2021, by the present administration. Going by this timetable, the scheme will hopefully not come into effect for this H-1b cap season, which is excellent news.

Earlier on, the U.S. Department of Labor’s Employment and Training Administration (ETA) and Wage and Hour Division (WHD) had announced a new interpretation of their regulations and accompanying guidance in ongoing efforts to protect American jobs and ensure employers pay temporary foreign workers admitted under the H-1B visa program as the law requires. The proposed form changes are the latest in a series specifically targeting employers who distribute talent to third-party worksites. The new Department of Labor (DOL) memo promised to complicate operations and bring potentially serious problems to companies that employ H-1B visa holders and place them at client sites. That memo was luckily withdrawn today as the underlying proposed  H-1b regulation, based on which the Memo was published, “Strengthening the H-1b” was not published on time by the Trump administration and was rescinded by the Biden Administration.

Legislative reforms can make it easier for those individuals without an H-1B to gain permanent residency, however until that happens, an H-1B visa will remain the most practical way for many individuals who work long-term in the United States, including international students. According to a report by the National Foundation for American Policy (NEFAP), Around 75% to 80% of full-time graduate students in key technology fields at U.S. universities are international students.

Overview of Biden’s Immigration Commitments: What to Expect

The Biden-Harris team’s plan has a number of proposed reforms that are of interest especially in regard to business immigration. They include the following:

1.Reforming the visa policy in select sectors for temporary employees. Reforms would include encouraging employees to select seasonal industries to switch jobs while certifying the need for foreign workers in the labour market. Employers would have facts and figures that indicate a lack of availability of labour and the damage that would occur if temporary staff were unavailable.

2. Providing a path to legalization for agricultural workers. President-elect Biden supports “compromise legislation” between farmworkers and the agricultural sector that will provide legal status based on prior agricultural work history and a faster track to a green card and ultimately citizenship.

3. To overhaul the temporary visa scheme. The Biden plan argues that high-skilled temporary visas “should not be used to disincentivize recruiting workers for in-demand occupations already in the United States” and that an immigration system “that crowds out high-skilled workers in favour of only entry-level wages and skills threatens American innovation and competitiveness.” President-elect Biden said he wants to work with Congress to reform this first. In order to prevent long backlogs, Biden would also support expanding the number of high-skilled visas and removing the per-country cap on employment-based visas.

4. Increasing the number of visas offered based on macroeconomic conditions for permanent, work-based immigration. the Biden plan recognizes that the number of visas dependent on jobs is limited to 140,000 each year, without the flexibility to adapt to the state of the labour market or the demands of domestic employers. Biden wants to work with Congress to increase the amount of permanent, employment-based immigrant visas awarded and “promote mechanisms to temporarily decrease the number of visas during times of high U.S. unemployment.” Recent PhD graduates in STEM (science, technology, engineering, and math) fields in the United States will also be exempted from any limit.

5. Creating a new category of visas to enable cities and counties to petition for higher immigrant levels to sustain their development. Biden will support a program to enable any county or municipal executive of a large or medium-sized county or city to request additional immigrant visas to support the economic development strategy of their region. Employers will need to certify that there are open positions in those regions and no U.S. staff to fill them.

Many of these proposed measures would, no doubt, require congressional action in some cases. The Biden team is considering actions they can take otherwise, such as through the administrative process and executive orders, they might do. A number of regulations that were released as proposed or interim final rules were finalized by the Trump administration, some of which would take a long regulatory procedure to be overturned. The Law Offices of Prashanthi Reddy will be closely monitoring policy implemented by President Biden’s administration and how it might apply to pending or future applications.

2. Dismantling and Reconstructing the U.S. Immigration System: A Catalog of Changes Under the Trump Presidency,” Cato Institute

4. How Do We Reconceptualize and Remake Our Immigration System for the 21st Century?,” Ideaspace.com

5. Recruiting for the Future: A Realistic Road to a Points-tested Visa Program in the United States,” Cornell Law School

6. What a Biden Win Means for Immigration: The First 100 Days,” Wolfsdorf Rosenthal

7. Biden Expected to Reverse Many of Trump’s Immigration Policies,” Voice of America