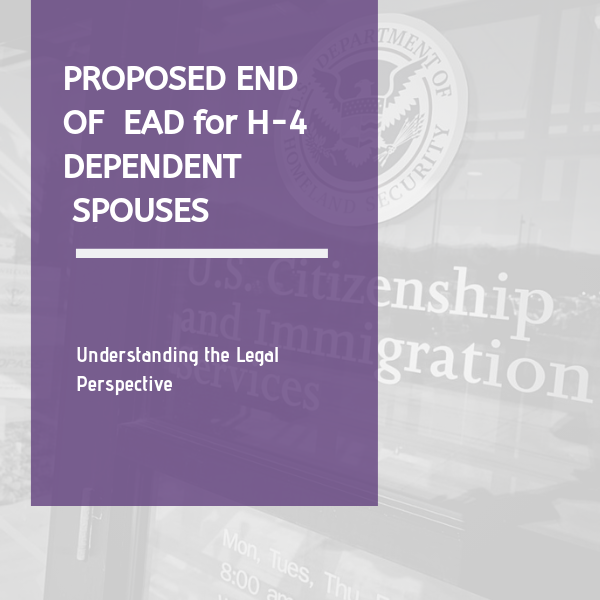 On February 2019, the Department of Homeland Security (DHS) proposed a rule to end the H-4 EAD program (which allowed certain spouses of H-1b visa holders to obtain an employment authorization (EAD)). This proposed rule was submitted to the White House Office of Management and Budget (OMB) for review on February 20, 2019.

In 2015, during Obama’s tenure, the DHS released a final rule, which allowed certain H-4 dependent spouses of H-1b status holders to be eligible for an EAD. This resulted in a lawsuit being filed by Save Jobs USA on April 23, 2015, which demanded that the U.S. District Court for the District of Columbia rescind the H-4 employment authorization final rule as well as stopping the DHS from executing it. According to the lawsuit, the publication and implementation of the final rule was beyond the statutory authority of the DHS. Additionally, according to the lawsuit, the rule adversely affected Save Jobs USA’s members since it led to increasing competition for employment. The U.S. District Court for the District of Columbia dismissed this lawsuit. This dismissal was appealed.

The intent to rescind EAD for H-4 spouses was first made public in 2017. Due to the Buy American and Hire American executive order signed by President Donald Trump, the DHS seeks to review and rescind the 2015 H-4 EAD final rule. DHS hopes to remove H-4 spouses of H-1b status holders as a class of nonimmigrants eligible for the EAD.

Due to the intent of the DHS to review the H-4 EAD rule, the Save Jobs USA v. DHS case was rescheduled until September 27, 2017. The next hearing of the Save Jobs USA v. DHS will be on April 29, 2019, when Save Jobs USA presents their reply brief (their part of the story). Both the DHS and Immigration Voice (Immigration Voice is a 501(c)(4) nonprofit organization working to alleviate problems faced by legal high-skilled foreign workers in the United States, including delays due to visa number unavailability for certain employment categories and backlog delays. They filed a motion to intervene in this case and the motion was accepted.) presented their briefs on April 1, 2019, and April 8, 2019, respectively.

The Employment Authorization for Certain H-4 Dependent Spouses final rule, commonly known as the H-4 rule or the H-4 EAD rule, came into effect on May 25, 2015. This rule is designed to encourage highly skilled H-1b workers to prolong their stay in the United States and work towards obtaining a permanent residency status by making their H-4 dependent spouses eligible for EAD.

To be eligible, the H-4 status holder has to be the dependent spouse of H-1b visa holders (this include H-1b nonimmigrants whose

A. Status is grant under the AC-21 Act

B. or are principal beneficiaries of an approved Form I-140, Immigrant Petition for Alien Worker).

Rescinding the H-4 EAD will have significant effects on H-1b skilled workers and their families. The availability of the H-4 EAD enabled many highly skilled foreign workers to start families, buy homes and invest in higher education. Rescinding the EAD rule will not only adversely affect these people; it will also inadvertently cause the U.S. to lose highly skilled labor.

(a) Due to the EAD rule, 87% of families of H-1b status holders have dual incomes.

(b) 52,000 families have homes in the U.S. that cannot be paid for without income from dependent spouse on EAD.

(c) 27,000 H-1b status holders and dependent spouses have a child and as such require dual incomes source provided by the H-4 EAD to cover unescapable expenses that come with raising a child.

(d) In addition, since 90 percent of H-4 dependent spouses are females, the rescission of the H-4 rule will have an unequal outcome on women.

(b) Out of the employed 91,000 H-4 dependent spouses, 99 percent are college graduate and nearly 60 percent hold Masters Degrees, rescinding the rule will cause the U.S. to lose a large pool of highly skilled workers.

As presented by immigration voice

(a) Two-thirds of H-4 dependent spouses on the EAD work in occupations where unemployment rates are less than 2 percent.

Best Course Of H4 Dependent Spouses Eligible For The EAD

In the midst of all the uncertainty surrounding the H-4 EAD program, we at the Law Offices of Prashanthi Reddy, are advising our clients with H-4 EAD to renew their EADs as soon as possible (180 days before current EAD end date). Eligible foreign nationals who have not applied for an H-4 EAD should seriously consider starting the application process as soon as possible. We are hoping that the final law will not affect people who are already on H-4 status. Alternatively, persons with an H-4 EAD, who have the option to change their status to an H-1b, should consider filing for the same or look at other work authorization types available to them. We will be happy to assist with that process.

A. White House Office of Management and Budget. (2018). Removing H-4 Dependent Spouses from the Class of Aliens Eligible for Employment Authorization. Retrieved April 11, 2019, from https://www.reginfo.gov/public/do/eAgendaViewRule?pubId=201810&RIN=1615-AC15

E. Brief for the Chamber of Commerce of the United States of America, the Information Technology Industry Council, and the National Association of Manufacturers as Amici Curiae in Support of affirmance, Save Jobs USA v. DHS. (No. 16-5287). (2019) Retrieved April 11, 2019, from http://documents.nam.org/LAW/SaveJobsUSAvDHSDCCir04082019.pdf