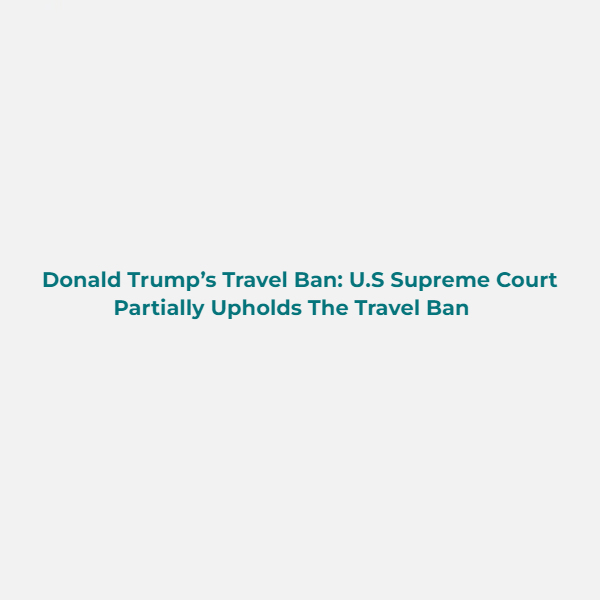 This lead to Donald Trump signing a second travel ban on March 6, 2017, which had the same title as the previous travel ban executive order. There were some changes to this revised version. For instance, Iraq was removed from the list of countries barred. However, this revised travel ban still maintained the refugee limit and still suspended the USRAP program (United States Refugee Admissions Program) for 120 days. Judge Derrick Watson of the US District Court for the District of Hawaii blocked this revised travel ban on March 22. The 4thCircuit Court of Appeals took up the case and ruled against the travel ban. The three-judge panel of the 9th Circuit Court of Appealsalso took up the case, after an appeal from the government.And on June 12,the 9th Circuit Court of Appeals mostly upheld the rulings of Judge Derrick Watson. The 9th Circuit Court concluded that, unless the present administrationcould provide justification that the entry of a foreign national was dangerous to the interests of the United States, barring every single citizenof the six countries from entering the United States was in violation of the Federal Immigration and Nationality Act. The Trump administration then took the case to the Supreme Court.

On June 12, White House press secretary, Sean Spicer, said the present administration was reviewing the ruling by the9thCircuit and firmly believed that the revised Executive Order is “lawful”, and that the Supreme Court will uphold it.

What Did The Supreme Court Decide?

What will happen to refugees seeking entry into the United States from war-torn countries such as Syria? The Supreme Court decided that the same rules imposed on foreign nationals of  the six barred countries would also apply to refugees.

The Supreme Court has decided to hear arguments against the travel ban in its next term, which begins in October. After that, the Supreme Court will make its final ruling. Until then, the ruling on Monday will be ineffect. According to a Presidential Memorandum, President Trump said, relevant governmental agencies will wait 72 hours after a court has given the government the power to implement the ban, before imposing the ban.