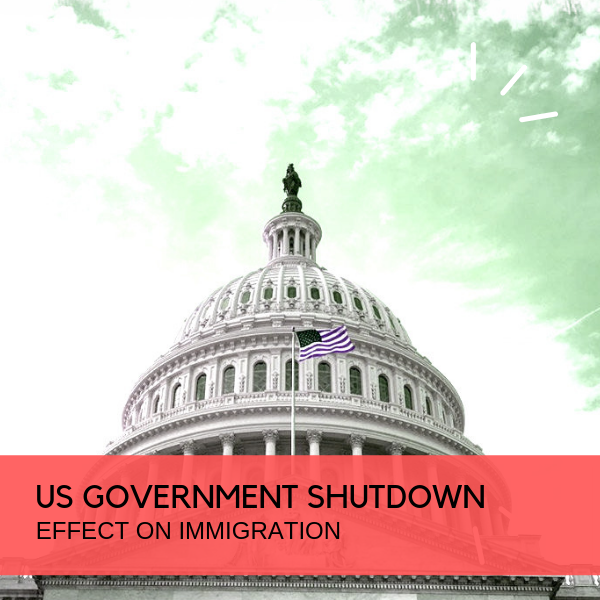 The negative effects of this record-breaking government shutdown can be severely felt in the immigration sector. Not only are many foreign nationals in the United States left in limbo over their futures in the United States, companies with foreign workers have also been affected. With the E-Verify system down, employers in the private sector are unable to determine the immigration status of foreign workers. This will certainly affect the operations of such businesses.

With President Donald Trump and Congress not being able to come to an agreement on the allocation of funds, a government shutdown ensued. This is as a result of an impasse over Trump’s demand for federal funds, in the amount of $5.6 billion, to undertake the construction of the U.S.–Mexico border wall.

A lapse in funding has effected nine executive departments, the shutdown has directly affected over 10 governmental agencies and about 800,000 federal employees. The effect of the government shutdown which has been ongoing since December 22, 2018, can be felt throughout every aspect of American life (from air safety, FDA’s routine inspections of food processing facilities, to scientific research, just to name a few). The immigration sector has also been hugely affected as immigration courts have had to remain closed during the shutdown. As such, foreign nationals waiting for their case to be heard in the immigration courts will have to wait even longer. Evidentially, this shutdown has resulted and will continue to result in the postponement of hearings that were scheduled to take place during the government shutdown.

The statistics are overwhelming and unprecedented. According to reports the Transactional Records Access Clearing House at Syracuse University, about 43,000 court hearings have already been canceled because of the current government shutdown. This is in addition to the already record-high case backlog of 800,000 cases that exists. An additional 20,000 court hearings will not be heard for every week that the government remains shut down. As such, by the end of January as much as 100,000 court hearings may need to be postponed if the shutdown has not ended by then. With so much backlog, postponed hearings may not be heard until 2020 leaving many uncertain about their future in the United States.

Even if the current shutdown is to end today, the amount of backlog it has caused will create much workload on the immigration courts. Similarly, foreign nationals who are supposed to have their cases heard in court will have to face a long wait. The sooner this shutdown ends the better.

Since most USCIS operations are fee-funded (foreign nationals pay the fees for their application and processing), the effect of the shutdown will be minimal, citizenship ceremonies, naturalization interviews and petitions to change immigrant status process will proceed as normal. If you have already filed a petition before the government shutdown, the processing of the petition will proceed as it always does, despite the shutdown. Filed petitions will not be affected. Similarly, scheduled interviews and biometric processing will proceed as they normally do.

Affected USCIS operations include E-Verify (a service used to check the eligibility of foreign national employees in the United States), and the Conrad 30 Waiver Program for J-1 medical doctors. As the government shutdown resulted in the expiration of the Conrad 30 Waiver Program, J-1 medical doctors cannot apply for a waiver for the two-year home residency requirement once they complete the J-1 program. In addition, because the EB-5 regional center program (not the EB-5 program) and EB-4 Certain Religious Workers programs were not reauthorized on December 21, 2018, these programs expired. In addition, adjudication of cases that requires governmental functions will be postponed. An example is a case is one that needs clearance from a federal agency affected by the shutdown.

The Department Of Labor is not affected by the current government shutdown as Congress has already passed the needed legislation to fund the DOL for the current fiscal year (through to September 30, 2019). As such, LCA (labor condition application) processing, prevailing wage determination, and labor certification will proceed as they normally do.

The U.S. consulates will process visa applications since filing fees are paid by applicants. As far as filing fund is available, visa processing will proceed as required. Passport services will also continue as it usually does.

The Immigration and Customs Enforcement operations and activities will proceed as they normally do regardless of the government shutdown. As such, services such as the Student and Exchange Visitor Information System (SEVIS) will remain functional.

Regardless of the shutdown, the Customs and Border Protection will function as it normally does – processing immigration applications, and carrying out inspections at the ports of entry and borders.

The SAVE system will not be affected by the shutdown. The SAVE (Systematic Alien Verification for Entitlements) is used to verify applicants immigrant status when they apply for government entitlements/benefits.

Despite the government shutdown, the Social Security Administration should operate as normal. This agency will continue to issue replacement cards as well as process Social Security applications

As already mentioned, with the exception of urgent deportation cases, all other hearings will be postponed while the government shutdown is in effect. As of September 2018, over 8000,000 cases were already backlogged. Postponed cases will add to this backlog, placing even more pressure on the immigration courts.

The negative effects of this record-breaking government shutdown can be severely felt in the immigration sector. Not only are many foreign nationals in the United States left in limbo over their futures in the United States, companies with foreign workers have also been affected. With the E-Verify system down, employers in the private sector are unable to determine the immigration status of foreign workers. This will certainly affect the operations of such businesses.