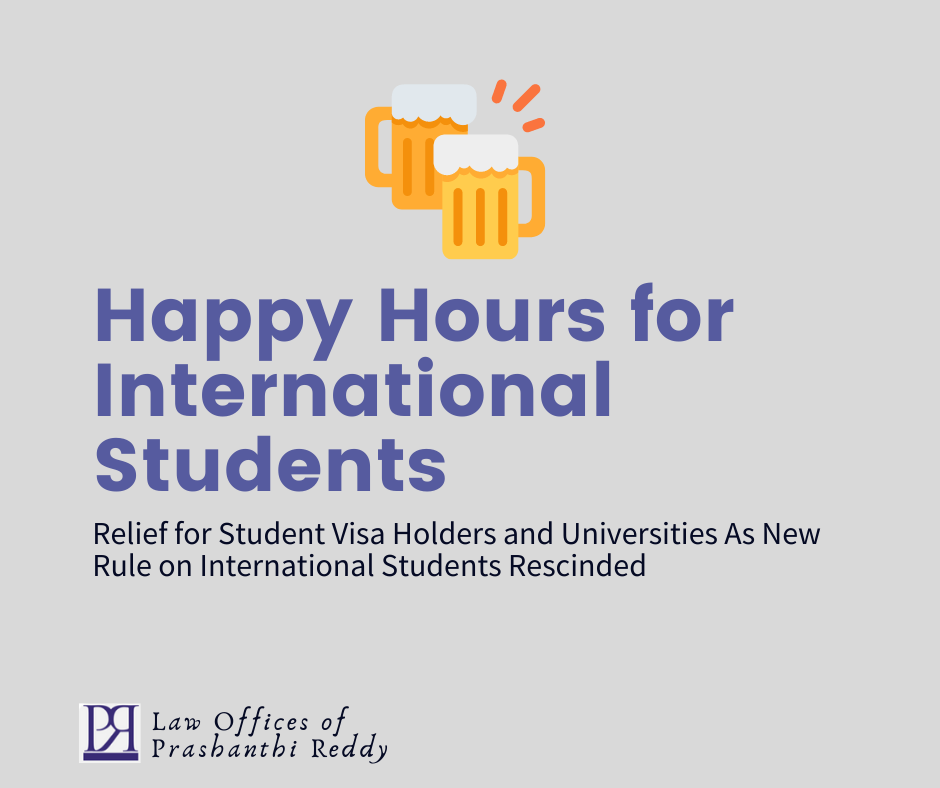 In a move that brings tremendous relief for international students and universities, the Trump administration rescinded a rule that would have seen many international students leaving the US. On July 6, 2020, the U.S. Immigration and Customs Enforcement (ICE) announced that “Nonimmigrant F-1 and M-1 students attending schools operating entirely online may not take a full online course load and remain in the United States.” Nonimmigrant F-1 visas are issued to students who pursue academic courses in the US while M-1 visas are for students who intend to pursue vocational courses. But, the administration went on to rescind this new rule on July 14, 2020.

The rescinded rule would have essentially meant that international students would have to leave the country if their universities had decided to have online-only classes for the 2020 fall semester. The students would have had three difficult options: either transfer to a school that offered in-person classes, leave the US, or face the risk of deportation. New visas also would not have been issued to students who were planning on joining the fall semester at schools offering online-only classes. This old rule had predictably upset the educational institutions as many of them have opted for online classes due to public health concerns over the continuing Covid-19 pandemic.

Harvard University and the Massachusetts Institute of Technology had actually filed a lawsuit against the government in federal court. They were seeking a temporary restraining order and an injunction preventing the government from enforcing the rule. It was in fact during this hearing that U.S. District Judge Allison Burroughs said that the federal immigration authorities had agreed to rescind the July 6 directive and “return to the status quo.”

Besides this lawsuit, California’s public colleges and later a coalition of 17 states had joined to the list of litigation against the government. They argued that federal immigration authorities had violated procedural rules by issuing the new rule without justification and without allowing the public to respond. The now-rescinded rule had also come as a surprise as the U.S. Immigration and Customs Enforcement had earlier announced on March 13, 2020, that existing limits on online education would be suspended “for the duration of the emergency.” The Harvard-MIT suit pointed to this earlier directive and noted that the president’s national emergency declaration has not been rescinded and that we are seeing a resurgence of Covid-19 cases in some regions of the country.

Besides obvious public health concerns over the pandemic, the education institutions also expressed concerns that the July 6 directive was about forcing schools to reopen for the fall semester. But, immigration watch groups seem to believe that this move is about reducing legal immigration to the country. In the July 6 press release, the U.S. Department of Homeland Security had announced plans to publish the new procedures in the Federal Register as a Temporary Final Rule.

Before the new rule was rescinded, immigration authorities had argued that any directive made in light of the pandemic was subject to change. There always has been a limit to the number of online courses international students can take and that the administration was showing leniency due to the circumstances of the pandemic.

With the rapid number of presidential proclamations and directives on immigration in the past six months, our advice for students and schools would be to seek legal counsel. Universities and colleges would be especially affected by these new changes as they could stand to lose millions of dollars in revenue that international students pay as tuition every year. As for students, the loss of access to high-quality education would be devastating. Keep a watch on this space as we update new information and know that our legal offices will be happy to offer counsel.