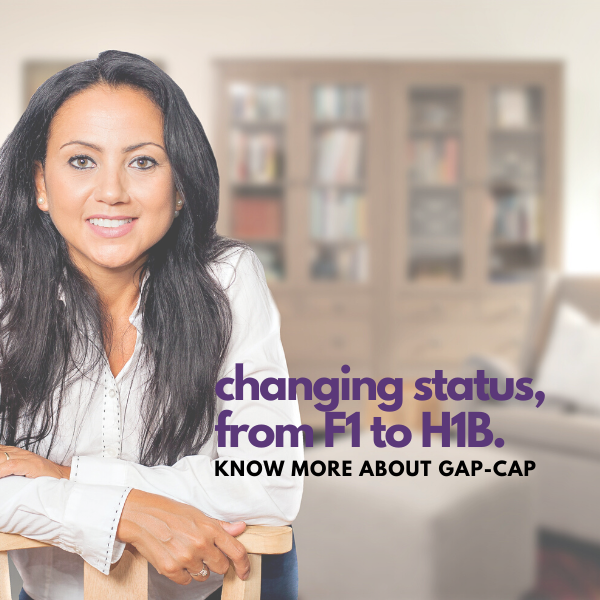 Every year a lot of international students studying in different US universities and colleges seek a change of status from F1 student status to H1B temporary employment status after completing a program of study or post-completion optional practical training (OPT). As per federal law, every student is given a 60 day period to take necessary steps to maintain the legal status or depart the country. However, because the change to H-1B status does not occur until Oct. 1, an F-1 student previously had two or more months following the 60-day period with no legal status.

Current regulations allow certain students with pending or approved H-1B petitions to remain in F-1 status during the period of time when an F-1 student’s status and work authorization would otherwise expire to the start date of their approved H-1B employment period. This is referred to as filling the “cap-gap”. This term alludes to how the regulations provide a way to fill the “gap” between the end of F-1 status and the beginning of H-1B status that might otherwise occur if F-1 status is not extended for qualifying students.

Important Facts To Know About Gap-Cap:

A1. How does Cap-Gap Occurs?

Since an employer may not file, and USCIS may not accept, an H-1B petition submitted more than six months in advance of the date of actual need for the beneficiary’s services or training, the earliest date that an employer can file an H-1B cap-subject petition is April 1 for employment that doesn’t start before October. If USCIS approves the H-1B petition and the accompanying change of status request, the earliest date that the student may start the approved H-1B employment is October 1.

Consequently, F-1 students whose periods of authorized stay expire before October 1, and who do not qualify for a cap-gap extension, are required to leave the United States, apply for an H-1B visa at a consular post abroad, and then seek readmission to the United States in H-1B status, for the dates reflected on the approved H-1B petition.

A2. Which petitions and beneficiaries qualify for a cap-gap extension?

H-1B petitions that are timely filed on behalf of an eligible F-1 student and request a change of status to H-1B on October 1, qualify for a cap-gap extension.

Timely filed means that the H-1B petition (indicating a change of status rather than consular processing) is filed during the H-1B acceptance period, which begins April 1, while the student’s authorized F-1 duration of status (D/S) admission is still in effect (including any period of time during the academic course of study, any authorized periods of post-completion Optional Practical Training (OPT), and the 60-day departure preparation period, commonly known as the “grace period”).

Once a timely filed request to change the status to H-1B on October 1 has been made, the automatic cap-gap extension will begin and will continue until the H-1B petition adjudication process has been completed. If the student’s H-1B petition is selected and approved, the student’s extension will continue through September 30, unless the petition is denied, withdrawn, or revoked.

If the student’s H-1B petition is not selected, the student will have the standard 60-day grace period from the date of the rejection notice or their program end date, whichever is later, to prepare for and depart the United States.

Students are strongly encouraged to stay in close communication with their petitioning employer during the cap-gap extension period for status updates on the H-1B petition processing.

A3. How does a student covered under the cap-gap extension obtain proof of continuing status?

The student should go to their Designated School Official (DSO) with evidence of a timely filed H-1B petition (indicating a request for change of status rather than for consular processing), such as a copy of the petition and a FedEx, UPS, or USPS Express/certified mail receipt. The student’s DSO will issue a preliminary cap-gap I-20 showing an extension until June 1.

If the H-1B petition is selected for adjudication, the student should return to his or her DSO with a copy of the petitioning employer’s Form I-797, Notice of Action, with a valid receipt number, indicating that the petition was filed and accepted. The student’s DSO will issue a new cap-gap I-20 indicating the continued extension of F-1 status.

A4. Is a student who becomes eligible for an automatic cap-gap extension of status and employment authorization, but whose H-1B petition is subsequently rejected, denied or revoked, still allowed the 60-day grace period?

If USCIS denies, rejects, or revokes an H-1B petition filed on behalf of an F-1 student covered by the automatic cap-gap extension of status, the student will have the standard 60-day grace period (from the date of the notification of the denial, rejection, or revocation of the petition) before he or she is required to depart the United States.

For denied cases, it should be noted that the 60-day grace period does not apply to an F-1 student whose accompanying change of status request is denied due to the discovery of a status violation. The student in this situation is not eligible for the automatic cap-gap extension of status or the 60-day grace period. Similarly, the 60-day grace period along with the automatic cap-gap extension of status does not apply to the case of a student whose petition was revoked based on a finding of fraud or misrepresentation discovered following approval. In both of these instances, the student is required to leave the United States immediately

A5. Can students travel outside the United States during a cap-gap extension period and return in F-1 status?

No. A student granted a cap-gap extension who elects to travel outside the United States during the cap-gap extension period will not be able to return in F-1 status. The student will need to apply for an H-1B visa at a consular post abroad prior to returning. As the H-1B petition is for an October 1 ( the start date), the student should be prepared to adjust his or her travel plans, accordingly.

A6. What if a student’s post-completion OPT has expired and the student is in a valid grace period when an H-1B cap-subject petition is filed on their behalf? It appears that F-1 status would be extended, but would OPT also be extended?

A7. Do the limits on unemployment time apply to students with a cap-gap extension?

Yes. The 90-day limitation on unemployment during the initial post-completion OPT authorization continues during the cap-gap extension.

A8. Can a student eligible for a cap-gap extension of post-completion OPT employment authorization?

Yes. However, such an application cannot be made once the cap-gap extension period is terminated (this includes when the H-1B petition is rejected, denied, or revoked), and the student has entered the 60-day departure preparation period.