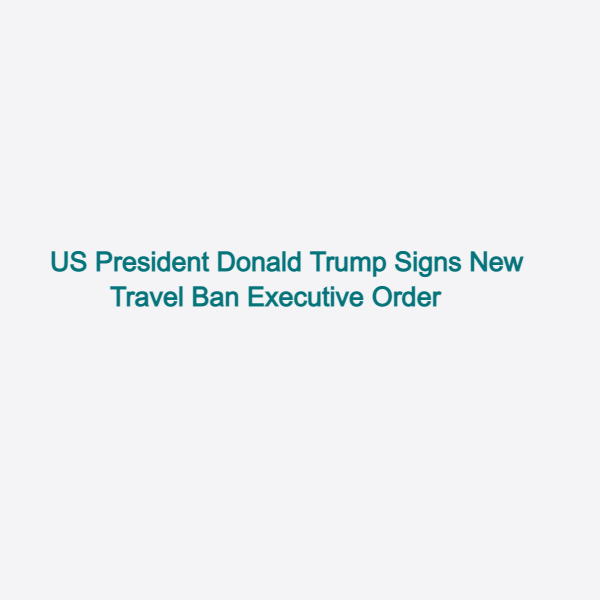 In response to the suspension of the executive order signed in January, the president signed a new travel ban on Monday, March 6, 2017 with the same title as the old executive order – “Protecting the Nation from Foreign Terrorist Entry into the United States.” This new executive order will take effect on Thursday, March 16, 2017.

The new order, however, still suspends the resettlements of refugees in the U.S. for 120 days, and significantly decreased the number of refugees the USRAP (US Refugee Assistance Program) can resettle in the fiscal year of 2017 from 110,000 to 50,000. According tothe American Immigration Lawyers Association(AILA), not only does the new executive order fail to make the nation safe, it will cause thousands of refugees who have already been vetted to be stuck in dangerous conditions.

According to the secretary of state, Rex Tillerson, the new executive order will strengthen the national security of both the United States and her allies.

According to the Department of Homeland Security, a country-by-country review will be done on each of the six prohibited countries’ “identity and security information” provided to the United States for visa programs. Also, the order will allow the United States to add any country that needs more restraints.

President Trump has maintained that restrictions are essential if the United States is to stop attacks on United States soil. As such, the president had slated judges who earlier this year had suspended the old travel ban. The new executive order is, therefore, designed to withstand legal scrutiny for which the old order failed. As according to the new order, the old version “was not motivated by animus toward any religion” which the old version was accused of. As such, provisions that prioritized persons from religious minority groups who are facing religious prosecution are absent from the new executive order. The AILA, however, disbelieves this new version will withstand legal scrutiny as the new executive order’s prohibited countries are all Muslim-majority countries just like the old version’s was, and the new version fails to offer sufficient evidence that the nationals of the prohibited countries pose any threat to U.S. security.

What the New Travel Ban Does

Persons whom the new version of the Executive Order Do Not Affect Once In Effect:

Persons Whom the Order Will Apply To Once In Effect

Foreign Nationals of the Prohibited Countries Who May Qualify For Waiver:

The Commissioner of US Customs and Border Protection,or a consular officer or the Commissioner’s delegate can choose, on an individual and independent basis, to provide a visa to, or authorize the entry of, a national of one of the barred countries if: