Although Demand Is Still Strong, Number Of H-1b Petitions For FY 2019 Drops 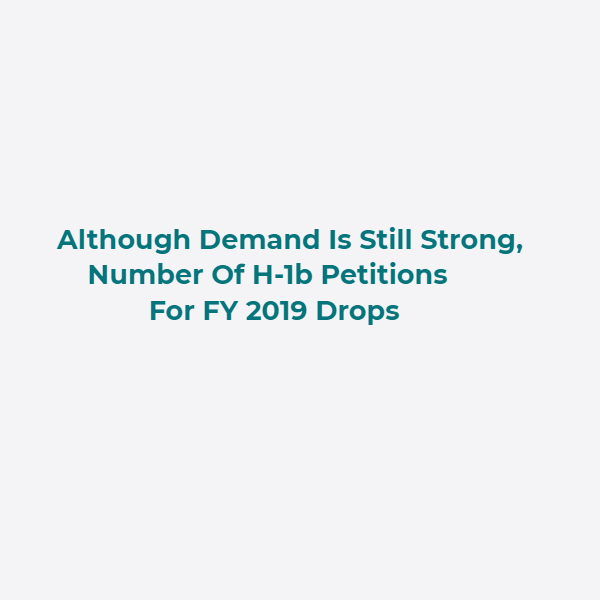 As announced by the US Citizenship and Immigration Services, on April 12, for the second consecutive year, there has been a reduction in the number of H-1b petitions received by the USCIS. This April, the USCIS received 190,098 petitions. This is a significant drop of 4 percent compared to the 199,000 petitions received in the previous year.

What Are Some Current H-1B Trends?

The decline in the Number of H-1B Petitions Filed

It comes as no surprise that a policy memo released in February, Contracts and Itineraries Requirements for H-1B Petitions Involving Third-Party Worksites, sought to tackle this problem.

The policy changes introduced by the memo required H-1b beneficiaries provide more information on their employment so as to make sure that they do the jobs they are employed for.

This policy memo requires employers to provide information on work assignments such as locations of assignments and dates. This is to verify the relationship between the company applying for the H-1b visa and the beneficiary.

The length of the H-1b visa is also covered in this memo. According to the memo, the USCIS determines if there will be sufficient work available to an H-1b beneficiary by the examining work project documents. If there are signs that there would not be enough work for the full 3 years requested by the employer, a shorter H-1b visa may be approved.

An earlier policy memo released on March 31, 2017 rescinded an older policy memo called the Guidance memo on H-1b computer-related positions. The new policy memo dictated that since a 4-year bachelor’s degree is not the standard minimum requirement for a computer programmer position. The computer programmer position is no longer inherently eligible for an H-1b classification regardless of whether or not the beneficiary has a 4-year bachelor’s degree. This is of concern to many, because according to data released by the USCIS, IT jobs in the Custom Computer Programming Services industry accounted for the most H-1b petitions. Other occupational categories, which according to the Occupational Outlook Handbook do not have a standard minimum requirement for entry to be a 4-year bachelor’s degree, will likely be largely reviewed as well.

This effectively means that the occupation, for which most H-1b visa petitions are filed for, Custom Computer Programming Services, will be under much scrutiny.

In a letter written on April 4, 2018, L. Francis Cissna (the USCIS director), the USCIS plans on revising what “speciality occupation” entails. This is to ensure that the best foreign workers enter the United States through the H-1b program. In addition, the USCIS plans to undertake a revision on the delineation of employment and the employer-employee relationship. These proposed changes are to protect American workers and wages.

Request for evidence is simply a challenge that asserts that the beneficiary of an H-1b visa does not meet the requirements and as such further evidence needs to be submitted. The USCIS is simply asking for more evidence.

This trend seems to be in line with the current administration’s stance on the H-1b visa program.

What Happens After The Cap Number Is Reached?

After the completion of the lottery process, unselected petitions along with filing fees are returned to petitioners.

The USCIS send out visa approvals and request for evidence through the summer and fall months as the USCIS processes the petitions.