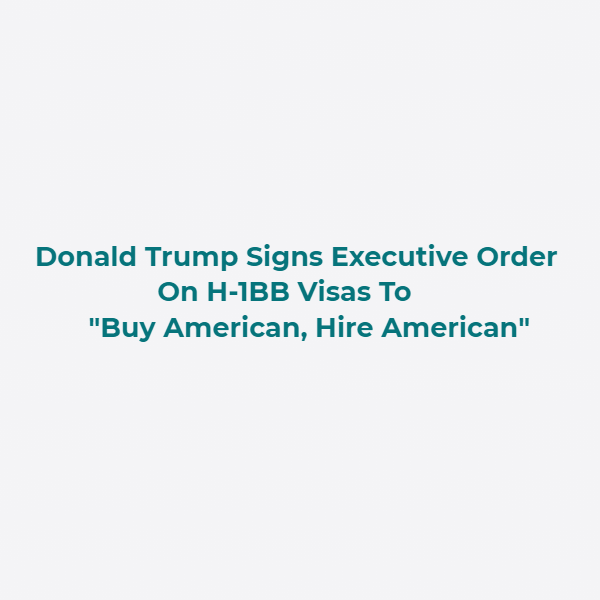 One of the main selling points of President Trump’s campaign was his vow to reduce the competition United States workers face in the job market. It comes as no surprise that on Tuesday, President Trump signed an executiveorder, which can be seen as his first step in the direction of reforming the United States work-based immigration outlook. The executive order entitled, “Buy American and Hire American”is supposed to not only protect American workers but also to have the United States government and agencies focus more on the purchase of made in the United States of America goods and services.Even though the new executive order calls for a review of current work visa policies, it fails to make any tangible changes.

The first part of the ‘Buy American, Hire American’ executive order focuses on the conducting of studies in order to bring forth programs, which will ensure federal agencies take full advantage of the use and procurement of products and materials made in America. Thus, “Buy American”.However, there is an intrinsic flaw to the “Buy American” agenda. Several economics experts have identified this flaw. It is true that U.S. government agencies procurements are more open to foreign suppliers than other nations’ government agencies are to U.S.suppliers as shown by data collected by the U.S. Government Accountability Office. When government agencies start buying overseas as is the case at the moment, there is most likely a reason for that. According to Lawrence Officer, an economics professor at the University of Illinois at Chicago, forcing government agencies to acquire domestic products at a higher price or of a lower quality might help U.S. workers, but taxpayers are the ones who will end up bearing the added cost.The root of the issue has to be addressed, rather than forcing government agencies to procure domestic products of a lower quality at a higher price.

How Do Foreign Workers Contribute To The United States Economy?

Many U.S. tech companies say there are not enough American workers to fill all IT and scientific job positions, as such the only way to meet hiring needs is to look overseas. Furthermore, foreign nationals, immigrants, and children of immigrants have played a major part in the development of the tech sector in the United States. Many companies such as Apple, WhatsApp,Google, Airbnb, and Intel have founders who are immigrants or offspring of immigrants.

A major concern in the high-tech industry of the United States is the huge skill gap. This is a fact that any high-tech IT consulting firm who have deficient in highly trained IT personnel will confirm. Denying U.S. firms of scarce human resources will only place the United States at a competitive disadvantage on the world market as this highly skilled personnel needed by the United States will move elsewhere thus subduing U.S. productivity. Many companies will also have no choice but to outsource. This will furthermore undermine the U.S. tech sector. According to the U.S. Chamber of Commerce, stopping the inflow of highly skilled workers is a mistake since this much-needed highly skilled workforce contributes to U.S. companies’ expansion and growth, and goes a long way in ensuring the U.S. economy can compete globally.

Likewise, without access to highly skilled foreign workers, many start-ups and small IT companies will have a hard time competing with tech giants such as Google, Apple, Microsoft and co for the nation’s already limited number of highly skilled workers. Punit Soni, the CEO of Learning Motors says the changes proposed by the ‘Buy American, Hire American’ executive order and the President Trump’s administration will harm start-ups. Filling job positions that require highly skilled specialists is possible due to the use of H-1b workers. It is also important to note that on average, IT professionals on an H-1b visa are actually paid more than the prevailing wage for thepositions they occupy.

Why Is There Much Focus On The H-1b Visa Program?

According to the Labor department, 40% of the H-1b visas are awarded to entry-level employment positions with an additional 40% awarded to foreign nationals with limited skills and experience levels.  While this is true, the H-1b quota of 85,000 is considered low by many IT firms who are in need of highly skilled information technology scientists and computer engineers.

Despite the fact that tech firms feel the H-1b quota is too low, the H1-b program is still one of the main routes by which American companies hire highly skilled foreign workers. Andwhile it is factual to say that the program is flawed, the aim of a reform should not be to simply cut down on the number of skilled foreign workers entering the United States as the skill gap is real. Rather the United States needs a pragmatic immigration policy that will increase the inflow of talented and highly skilled individuals who are needed while limiting the inflow of workers who are not needed.

Which Companies Employ Workers On The H-1b Visa?

American-based high-tech giants such as IBM, Google, Microsoft, Apple, and Cognizant make use of large numbers of H-1b visa holders. Likewise, many IT start-ups and small IT firms also make use of skilled workers on the H-1b visa. In addition, India-based outsourcing companies such as Infosys, Wipro Technologies, Tata Consultancy Services and Tech Mahindra are also some of biggest employers of H-1b visa holders. These firms bring in foreign tech specialists to undertake computing tasks for companies and business in the United States with whom they have contracts.

How Is the “buy American, Hire American” Executive Order Likely To Affect Immigration

Moreover, many Americans including the president share the sentiment that many U.S.companies and foreign outsourcing firms abuse the current work visa programs. In effect, the executive order wants a clampdown on abuse and fraud. This is certain to make the H-1b visa and other work visa programs adapt processes that are more strenuous than they currently are.

The issues addressed in the ‘Buy American, Hire American’ executive order are mostly left unanswered. Questions such as, ‘How will the government tackle the issues of the current immigration system?’, ‘Will there be an increase in the minimum salary amount H-1B workers are paid?’, ‘Will there be a reduction is the number of visas awarded?’ and much more are all left unanswered. The truth of the matter is that the executive order is thin on action and does not take any direct measures. Therefore, the ‘Buy American, Hire American’ executive order could end up being a bunch of words lacking real supporting action.