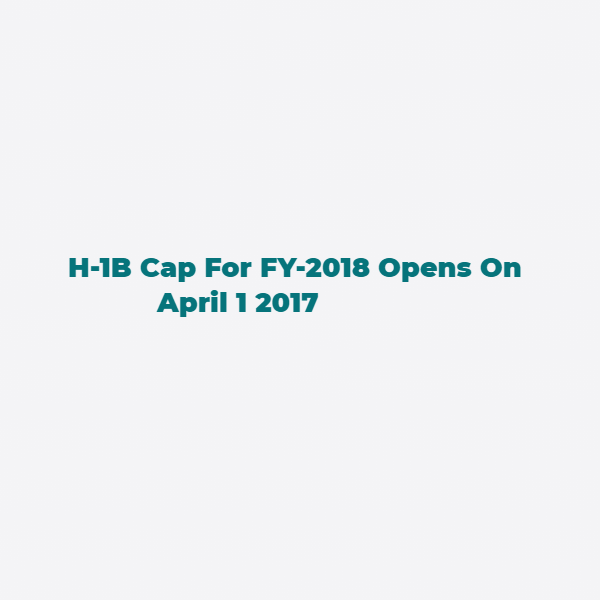 April 1stis fast approaching. This is the earliest date on which employers can start filing petitions requesting H1-B visa employment, which is the most common way to acquire temporary employment authorization in the United States. Although April 1, 2017, seems to be in the distant future, experienced employers are aware that, this date will come rather swiftly, and the H1-B cap will be reached. If that happens, employers will have to wait for up to 12 months before they can file another petition.

USCIS predicts that on April 1, 2017, we will witness a repeat of 2016’s H1-B visa filings, where nearly 233,000 applications were filed and the annual H1-B cap attained just days after the initial filing date of April 1, 2016. As usual, the USCIS monitors the amount applications received and notify the public on when the H1-B cap has been reached. This date is called the final receipt date. Although, you cannot predict with 100% certainty when the final receipt date for the FY2018 H-1B cap will be met, past trends can provide much insight. During the last 3 years, the H1-B cap was reached within the 1st week of filing, and that is expected to happen this year also. When the H1-B cap is surpassed within the 1st week of filing (i.e., by April 7th), the USCIS uses a lottery system to randomly choose the number of applications eligible for H1-B visa status. H1-B visa applications that are not selected will be returned with filing fees and without review. It is anticipated that this trend will continue. This makes it necessary to make all the needed preparation well in advance before April 1.

One important step that needs to be taken care of before April 1 is the Labor Condition Application (LCA). The LCA certified by the U.S. Department of Labor (DOL) must accompany the H1-B visa application. It can take up to seven business days for the Department of Labor to resolve the LCA. The employer will have to provide the required information to the DOL before the processing begins. It is before prudent to add an additional 4 days to the seven days already stated for administrative issues that might arise.

Other issues that the employer will need to review before April 1 includes,

Although the provision of facts and evidence are usually straightforward, there are cases when it becomes difficult to provide this information, as the requirements needed by the USCIS do not factor in business realities. This makes it essential to prepare ahead of time.

Employees whom employers must begin considering include college graduates on an  F-1 Optional Practical Training (OPT),  L-1B employees nearing the five-year limit, L-2 and E-2 employees working on Employment Authorization Documents (EADs), who wish to hold a status that is independent of their spouses.

The H1-B visa classification allows foreign nations to work in the United States for a maximum of 6 years, although there are exemptions to this duration limitation. The H1-B capindicates the number of visas available per FY (fiscal year). This quota is divided in two. 65,000 applicants are accepted on the regular H1-B cap. This requires a bachelor’s degree or its equivalents. 20,000 applicants holding a US advanced degree (master’s degree or higher) are accepted. If the advanced degree cap is reached before the regular cap, the extra applicants holding US advanced degrees are added to the regular cap. In total 85,000 H1-B visa visas are made available each FY. Also, 6,800 H-1Bapplicants’ spots are reserved for citizens of Chile and Singapore due to the Free Trade Agreements between both countries and the United States. These numerical limitations to the H1-B visa are called the H1-B numerical limit or H1-B cap.

There has been no further change since 2004, although there have been proposed rules to increase the quota such as the Comprehensive Immigration Reformproposed by the Obama administration which planned to rise the regular H1-B numerical limit to 110000 per FY, theH1-B numerical limit for applicants with US advanced STEM (science, technology, engineering and mathematics) degreesmade 25,000and requirementsthat allowsfor a H1-B visa cap of 180,000 when there is a high demand by U.S. firms for highly skilled workers that year.

Since FY2014, the H1-B Visa cap has always been reached within a week of April 1. This makes adequate preparation essential.

“The information provided can be found on the USCIS website.”

On Wednesday, January 4, 2017, Republic lawmaker Rep. Darrell Issa via his website re-introduced a bill that is supposed to tighten up H1-B visa and reduce the abuse of H1-B Visa Program. This legislation is meant to change the eligibility requirements for the H1-B visa exemptions and help stop the outsourcing of American jobs. [1]

This legislation if passed would increase the required minimal salaries of all foreign nationals who are granted the H1-B visa from $60,000 per year to $100,000 per year. In addition, the proposed legislation also plans to remove the exemption set aside for applicants with an advanced degree (master’s degree or higher).[2][3] The increment of the base salary is in line with the President-elect Donald Trump’s proposal to increase the salary level of foreign nationals working in the U.S. with an H1-B visa. [4]

According to Rep. Darrell Issa’s website, this bill is being re-introduced after U.S. companies such as Disney, SoCal Edison and others have been criticized for abusing the H1B visa program and using the program to replace American employees with foreign nationals. [1]