Reasons For The Decrease In H-1B Visa Filing 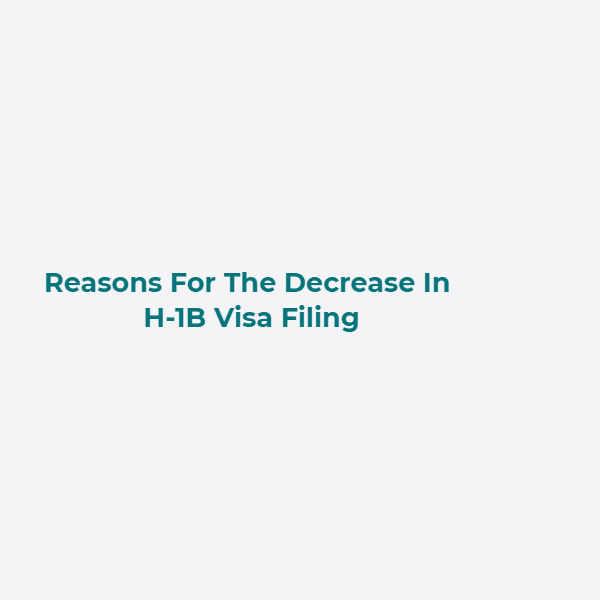 To many, it comes as no surprise that there has been a decrease in the H-1b visa filing for the fiscal year of 2018. From the temporary suspension of all premium processing of H1b filings, which may last up to 6 months (starting April 3, 2017), the increase in RFE/RFI’s by USCIS, slow processing time, and to an increase in hate crimes and hostility shown towards foreign nationals, we can attribute the decrease in H-1b visa filings to several factors. In addition, many of the big Indian companies (including IT companies) such as Infosys, Mindtree, IBM India, Accenture, iGate, CSC, Wipro, Tata Consultancy Services, HCL and many other which make up a large percentage of H1b applications are likely to apply for a lower number of H1b visas this year.

More and more Indian IT companies are looking to apply for less H1b visas than they have in the past. With the growth of digital and cloud-based services in the United States that requires staff onsite rather than traditional IT services that are delivered offshore, you would think Indian IT firms would seek to send more IT professionals to the United States (India’s biggest IT market) through the H1b visa program but that isn’t the case this year.

According to Business Insider, huge IT firms are employing new policies as they seek to be cautious in the face of the new political atmosphere in the United States. For instance, Infosys (Indian’s 2nd largest software exporter) will not be filing any H1b visa for junior staffs (& employees with less than 4 years of working experience). Also according to Bloomberg News, Mindtree Limited’s executive chairperson Krishnakumar Natarajan stated that the company seeks to stop filing for H1b visas for workers with low levels of experience. In totality, Mindtree Limited seeks to significantly lower the number of H1b visa applications, and Krishnakumar Natarajan expects all the other huge IT firms to follow suit.

All of this is happening in the face of the growing anti-immigration sentiment in the United States. The H1b program,in particular, hascome under much criticized. The H-1b visa program critics believe this visa program enables companies to ship lower paid foreign workers into the United States, thus taking jobs away from American employees. As such, IT firms reducing the number of H-1b visa applications for workers with less experience will reduce those criticisms.

Also, new proposed H-1b rulings are set to increase the wage rate of workers on the H-1b to $130,000 per annum. Although this bill is not yet a law, the sentiment towards immigrants has become a concern to many IT firms.

The USCIS also moved to suspend premium processing of H-1B visa filings; this means that applications eligible for visa approval within 15 days will have to go through the regular review period which takes months. Overall H-1b applicants will undergo a longer approval process. According to USCIS, the suspension of “premium processing” could last up to six months. Even without this suspension, the processing time for the H-1b visa is very slow, with clients having to wait for 6 months or more.

This coupled with the increased number of denials, means that more and more companies are looking elsewhere and are seeking to apply less for the H-1b visa. This suspension will not affect only the IT sector but all other sectors. According to Ahsan Hafeez, a Pakistani doctor awaiting approval of his H-1b visa application, the suspension of premium processing will lead to delay for doctors who want to serve communities where there is a lack of physicians in the first place.

An Increase in the Requests of Initial Evidence by the USCIS

Many visa applicants will attest to the fact that there is an increase in the number ofrequest of initial evidence issued. Not only is this stressful, this also increases the processing time of a visa application, as the visa processing of the applicant is either suspended or put on hold starting from the date of the RFE. An RFI/RFE is issued when the USCIS requires more information, which must be submitted before they can continue processing a visa application.

An Increase in Hostility towards Foreign Nationals

There has been a surge in hostility towards foreign nationals in the United States. According to NBC News, hate crimes towards Muslims, persons of Asian descent and Jews surged up by as much as 20% in 2016, and this figure has remained high, as we progress into 2017. In the same vein, VOA News reported that, in New York City, hate crimes is at its highest in more than a decade with an increase of 24% in 2016. Chicago witnessed an increase of 24%. Cincinnati, Ohio also witnessed increases of 38%. Overall, the trend is similar all over the United States. Because of this, many companies are reconsidering not only their H-1b policies but also their employee offshoring policies on the whole.

Indian companies make up about two-thirds of all H-1b visa applications. This is because India has a $150 billion information technology sector with the United States being India’s largest IT market.  With this in mind, it is important to realize that the India’s economy is one of the fastest growing in the world. As such, many Indian IT companies are seeking to invest in their home country andto diversify their investments. Indian IT companies such as Infosys Technologies Ltd are shifting from onsite projects, (which require them to ship employees) to the United States to higher information technology services (such as artificial intelligence platforms, cloud computing, and automation, which is more offshore-based). This means these IT companies will increase investment in their home countries while reducing investment in the United States. Also, there is an increase in IT investment by India companies such as Wipro, Tata Consultancy Services (TCS), and Infosys Technologies Ltd, in Mexico, and Latin Americas.

In the same vein, many other nations such as China, Russia, and Bangladesh have rapid growing economies into which they are investing much human resource.

It is not only the information technology section will be affected, but also the health care sector (especially since 25% of doctors in the United States are born outside the U.S., and there is a shortage of medical physicians in rural America and underserved communities), manufacturing sector and the US economy as a whole.

The reduction in H-1b filings will reduce the amount of capital and human resources (especially as there are qualifications for which there is a shortage in the United States) invested in the United States. This may ultimately lead to fewer jobs, as huge international firms take their investments elsewhere. Also, huge IT firms have already started investing more in offshore service provision, and this is expected to increase. A reduction in H-1b filings may furthermore lead to a reduction in the monetary amount of taxes available to the U.S. government, and will also affect the real estate sector.