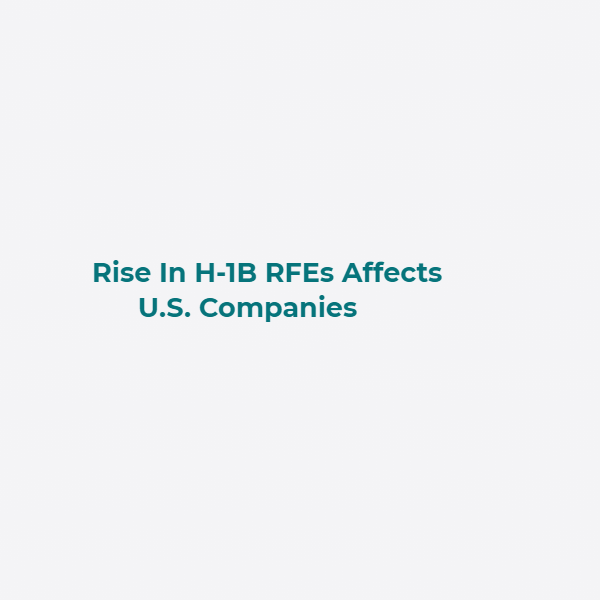 In 2017, the number of RFEs (request for additional evidence) issued by USCIS have seen a significant increase, although the number of H-1b petitions barely increased, as revealed by USCIS data. Although the total number of H-1b petitions between January 1 and August 31 increased by roughly 3 per cent as compared to the same period last year, the visa classification’s corresponding RFE numbers increased by as much as 44 per cent. As per a Reuter report, about 85,000 RFEs have been issued from January 2017 to August 31, 2017, while over a similar timeframe in 2016, 59,000 RFEs were issued. This sharp increase in H-1b RFEs has become a major problem that is affecting companies across the United States seeking to attract the best and brightest minds from all over the world.

It is not astounding that there has been a large increase in the number of RFEs issued in the first year of Donald Trump’s presidency since the H-1b visa classification has come under much criticism from many in the Trump administration, which views this visa classification as one, which takes jobs from American citizens. This has led to executive orders such as the “Buy American and Hire American” executive order, and policy changes such as the Recession of the “Guidance memo on H-1b computer-related positions” memo and the “Combating Fraud and Abuse in the H-1B Visa Program” initiative.

An RFE is essentially a challenge (request for further evidence) by the United States Citizenship and Immigration Services (USCIS), the immigration agency in the United States asserting that the beneficiary of a visa does not meet the requirements for the classification, thus a request for further evidence to adjudicate.  Generally, an 87-day window is allocated to respond to the RFE. A typical RFE usually includes pages of objections, which requires an immigration lawyer to carefully craft a response in conjunction with the client. This requires coordinating with others for an expert evaluation, acquiring corroborative letters from trade organizations and other employers in the same industry.

When a response to an RFE is considered unsatisfactory, the petition for the visa is denied. In the case of the H-1b visa category, a failed response to an RFE means that the employer will have to choice but to wait until the next year’s cap filing period to re-apply. Additionally, there is no guarantee that the application will be selected under the lottery system. RFEs, therefore, put both the visa beneficiary and the lawyer under much stress and uncertainty.

This has made it hard for many firms and entities seeking foreign expertise.

The types of requests that have seen a significant increase include those seeking applicants’ work history, applicants’ educational backup, information on job position and the connection of the visa beneficiary to the employers. This means that companies have to gather several additional documents in order to appeal the RFEs. Due to the Administrative Appeals Office (AAO) being backlogged, a decision on an appeal can take anywhere between months to years. This has made it difficult for firms wishing to hire foreign nationals.

According to the New York Times, many small tech firms find it difficult to compete with huge tech firms such as Microsoft, Google, Facebook, and many others for the limited number of specialty workers available in the United States. The H-1b program allows these small companies to acquire highly trained employees. (Understanding the H1b Requirements & h1b Visa Cap)

Hospitals and universities also rely on the H-1b visas to fill specialized job positions for which there are limited qualified U.S. personnel. As such, the increased amount of RFEs is damaging to many firms both big and small, since the appeal process is usually long and futile.

According to the U.S. Chamber of Commerce, job positions filled by workers on employment visa classifications allow for the growth and expansion of U.S. companies and helps ensures that the nation’s economy can compete on a global scale. However, the current flood of RFEs coupled with the current administration’s immigration policies has led to more and more firms setting up abroad. According to the New York Times article “As Trump Tightens Legal Immigration, Canada Woos Tech Firms”, Canada is one such place where tech firms are looking at.

It is important to keep in mind that over 50 percent of all billion-dollar tech startups in the United States are founded by immigrants, as per a study by National Foundation for American Policy. This phenomenon has been reported on by NBC News, and Fortune magazine among others.  As such, many U.S. based tech companies both huge and small such as Space X, Zenefits, Uber, Palantir, Airbnb, Google, WhatsApp, Apple, and Intel in the United States have founders who are either first-generation or second-generation immigrants. Creating a system that discourages foreign talent from working in the United States can only be detrimental to the U.S. economy.

The Buy American, Hire American executive order is not the only measure employed by the current administration to slow the H-1b classification.  On March 31, 2017, the government rescinded an established policy used in selecting H-1b computer personnel entitled “Guidance memo on H-1b computer-related positions.”  The new policy memorandum decided that the occupation of computer programmer would not automatically be deemed a “speciality” occupation when applying for this visa classification. According to the policy referendum since a 4-year bachelor’s degree is not the standard minimum requirement for entry into the occupation of the computer programmer as according to the Occupational Outlook Handbook. It is not inherently a speciality occupation eligible for H-1B classification even if the visa beneficiary holds a bachelor’s degree. As such, the employer will need to provide evidence to show that the position in which the beneficiary will occupy qualifies as a speciality occupation. Lastly, the USCIS may not consider a position a speciality occupation if the wage level for that position is entry-level.

Furthermore, in April, the USCIS further issued measures entitled “Combating Fraud and Abuse in the H-1B Visa Program” with the aim of “Protecting American workers”. Measures include the expansion of H-1b site visit to ensure employers meet H-1b wage requirements, and H-1b workers are performing their job duties and are at work locations; protection of H-1b employees who report suspected H-1b abuse and fraud; an email through which individual can contact the USCIS regarding suspected H-1b abuse and fraud; and a list of examples of H-1b fraud and abuse indicators.

Since its legislation in 1990, the H-1b visa has allowed thousands of foreign nationals to work and live in the United States for a maximum of 6 years. The H-1b classification enables 85,000 foreign nationals to work in the United States. Out of the total 85,000 H-1b visas granted, 20,000 are reserved for applicants with a US advanced degree (master’s degree or higher). Because there are more applicants than the number of visas allowed, the H-1b visa cap is usually reached within a week of April 1. According to data provided by USCIS, since the fiscal year of 2014, the H1-B Visa cap has always been reached within a week of April 1, when filing begins.

The Law Offices of Prashanthi Reddy, PLLC: A best h1b visa attorney in New York, USA the majority of our work is employment-based immigration, we are therefore in a unique position to advise our clients on best practices while filing H-1b cases.schedule  a consultation for any help