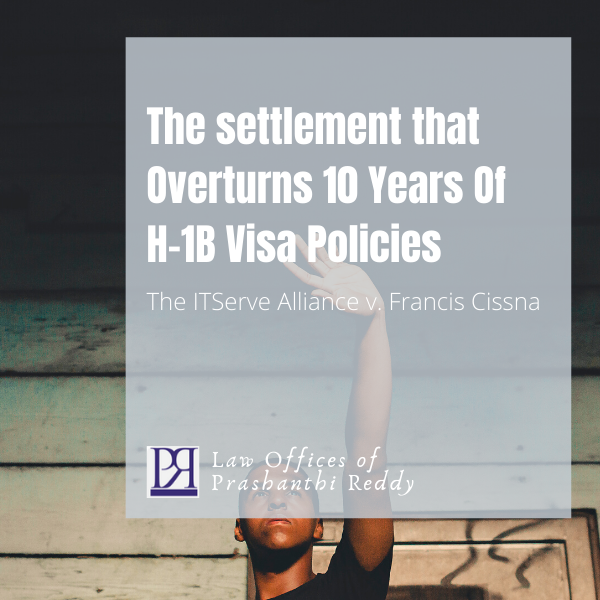 A settlement agreement reached between ITServe Alliance and the United States Citizenship and Immigration Services (USCIS) could mean drastic changes in the way the federal immigration agency adjudicates H-1B visa petitions, especially for petitioners from the IT sector. This potentially affects all of the IT sectors from small IT consulting firms to the Big Tech companies like Apple, Google and Microsoft. These companies, big and small alike, are among the top employers for H-1B workers in the country. But does this mean a major win for the IT sector and offshore employees seeking the H-1B visa? Let’s dive deeper to understand.

But first, the basics. ITServe Alliance v. Francis Cissna is a case where the plaintiffs were an industry association for IT firms and the defendant was L. Francis Cissna, Director of the United States Citizenship and Immigration Services. What was the case about? Filed on October 11, 2018, in the Federal District Court for the DC Circuit, the plaintiffs in the ITServe Alliance v. Francis Cissna case argued that the USCIS’s new definition of the H-1B “area of intended employment” as found in DOL regulations, is in fact unlawful. What were the court findings? On March 10, 2020, the court found that when the agency superseded pre-existing INS regulations, it indeed exceeded the law and was required to engage in formal rulemaking. Judge Collyer ruled, “The USCIS requirements that employers (1) provide proof of non-speculative work assignments (2) for the duration of the visa period is not supported by the statute or regulation and is arbitrary and capricious as applied to Plaintiffs’ visa petitions.” So, what was the settlement agreement? Before we jump into that, let’s get a brief history of the H-1B visa and the recent changes in the way the petitions were handled.

H-1B Visa History in a Nutshell

Introduced in the 1990s, the H-1B visa focussed on speedy processing of foreign workers’ visas in speciality fields (such as IT) that were necessary for American employers. The H-1B petitioners had to prove that they actually had a job offer from an American employer by providing a contract of employment, an itinerary detailing where they were going to work and when and other requirements. Things changed on January 8, 2010, when USCIS introduced a new policy what is known as the  “Neufeld” memo. The new policy asserted the authority to deny the H-1B visa to petitioners based on a potentially restrictive understanding of what constituted an “employer-employee” relationship. This led to many challenges for H-1B employers, especially in the IT sector. The National Foundation for American Policy (NFAP) put out some grim figures. According to NFAP, “Denial rates for new H-1B petitions for initial employment rose from 6% in FY 2015 to 30% in the first quarter of FY 2020.” Now, let’s get into the details of the case.

One of the significant decisions made by the court was that the limited definition of Employer-Employee Relationship as stated in the 2018 Policy Memo is not legal. It is inconsistent with the pre-existing INS regulation and it required formal rule-making to be upheld. The court’s stance of this issue was: ” The combination of the CIS 2018 Policy Memo and the CIS 2010 Guidance Memo—to which the former gave strictly and required reading—destroys any discretion left to CIS adjudicators and renders the 2010 Guidance Memo similarly invalid as applied to Plaintiffs.”

2. Proof of Client Work Assignments for the Duration of the H-1B Duration

Similarly, the court also found that the current policy of USCIS that the employers provide proof of client work assignments for the duration of the H-1B period is unlawful as it was enforced without the proper rule-making process. This requirement to provide proof of non-speculative work assignments for the entire tern (usually three years)  of an H-1B visa was never stated. Furthermore, under the American Competitiveness and Workforce Improvement Act of 1998, employers could, if needed, retain an H-1B employee during “nonproductive” periods as long as a company paid the H-1B visa holder. Here’s what the court had to say on this issue: “very few, if any, U.S. employer would be able to identify and prove daily assignments for the future three years for professionals in speciality occupations. What the law requires, and employers can demonstrate, is the nature of the speciality occupation and the individual qualifications of foreign workers.”

The third change is that the court found the itinerary requirement to be unenforceable. It was stated that without following the due process of rule-making, the requirement of a detailed itinerary was inconsistent with the previously enforced INS 1991 Regulation. The judge observed: “as applied to these Plaintiffs in the IT consulting sector, it is irrational, that is, arbitrary and capricious, to impose the INS 1991 Regulation as does CIS, requiring contracts or other corroborating evidence of dates and locations of temporary work assignments for three future years; it is, in fact, a total contradiction of the Plaintiffs’ business model of providing temporary IT expertise to U.S. businesses.”

4. Provide Reasoning Behind Any Short-term Approvals and Denials

The court also concluded that the USCIS must give a rationale of short-term approvals or denials, in whole or in part. This move came about as there were denials and short-term approvals that resulted from a 2018 USCIS memo on “Contracts and Itineraries Requirements for H-1B Petitions Involving Third-Party Worksites.”

The settlement agreement between ITServe Alliance and USCIS was reached on May 20th, 2020. This settlement will affect current as well as prior H-1B filings in the matter of the understanding of the employer-employee relationship and the validity period of H-1B approvals for employment at third party locations.

One of the changes that have come about from the settlement is that the USCIS has agreed to rescind “in its entirety within 90 days” the 2018 Contract and Itinerary Memorandum. The USCIS will also reopen the H-1B adjudications that were the subject of the ITServe Alliance v. Francis Cissna lawsuit. And, when reopening these adjudications the USCIS will not apply the interpretation of the current regulatory language, but comply with the March 10, 2020 ruling in ITServe Alliance v. Cissna. Another term of the settlement was that if the USCIS issues approvals with validity periods shorter than the time period requested by the H-1B petitioner, it has to give an explanation as to why the validity period is shorter.

What Does This Mean for H-1BWorkers and Their Employers?

To answer our earlier question is this a big win for H-1B petitioners? It indeed is as the settlement effectively overturns many of the stringent requirements of the H-1B visa petition such as the detailed itineraries and the restrictive understanding of the employer-employee relationship. But, it is important to note that the settlement nor the ruling prevent the USCIS or other relevant federal agencies from issuing new regulatory guidance or sub-regulatory guidance regarding H-1B eligibility. The March 10, 2020 ruling only stated that the USCIS 2018 Policy Memo is invalid and that the USCIS cannot enforce the USCIS 2010 Guidance Memo against Plaintiffs of this lawsuit.

Another important thing to note is that in order to overturn previous denials or for re-adjudications of shorter-term approvals, the petitioner has to go to court. USCIS is under no obligation to overturn these decisions proactively.

We hope this answers some of your questions about this landmark settlement. We will be happy to help you and explain how this settlement and the need to litigate to overturn previous adjudications affect you and your organization. Please do not hesitate to contact us.